First, the  Sandy Hook Elementary tragedy is not about gun control, either for or against. It's about children and educators and the families who lost them.  Please don't use "Sandy Hook" and the words "gun control" in the same sentence  around me.  Again, I don't care which side of the fence you are on regarding this issue, I just don't want the loss of these precious kids to be obscured by a political debate.  May not make sense but that's how I feel.

Second,  don't use angry, ugly names to vilify politicians and, in the same breath, tell me you got fired up via Christian radio. I am a devout Christian who  loves the Lord, esteems  His word and (most of the time - ha) tries to love all people, but especially my brothers and sisters in Christ.  But if Christian radio stirs you to anger over and over again, then in my humble opinion,  you need to quit listening to it.  The last time I looked, the book of James contains a warning about how the anger of man does not achieve the righteousness of God.  Be a good citizen, examine the issues, and vote responsibly - make your voice heard. But don't decry Gabrielle Giffords as a hardhearted monster because she is for gun control and had the temerity to say so to congress.  I am a conservative but I respect her and certainly, if anyone has a right to voice their opinion on gun control, she does.  I personally feel that crime is an issue of the heart but I respect Mrs. Gifford's right to voice her honest opinion and am deeply sorry that she ever has had to pay such a terrible price for doing her best to serve our nation.

Third, keep your eye on the ball.  God entrusted a message of reconciliation to His people.  II Cor. 5 says that we are His ambassadors, entrusted with a critical message - that man through His sin has become an enemy of God but that God, in love, wants to reconcile us to Himself.  That reconciliation is through the high cost of His Son's sinless life and the spilling of His innocent blood to pay for our guilt. (He is the slain lamb who takes away our sin forever).    The Gospel is so simple a child can understand it; a Down's syndrome adult can explain it; and a broken shell of a person, no matter where they have been or what they have done, can embrace it.  Please, let's quit squabbling over side issues.  When we get to Heaven, there won't be any.  In the meantime, let's work together to give out the message of reconciliation that has been entrusted to us.  The peripheral issues can be settled by the One who saves us and He has a myriad of  ways to correct our thinking and keep us in the center of His will. He doesn't need us to be theology cops checking up on one another.   If you have trouble believing that, please meditate on Romans 14 in the J. B. Phillips New Testament.

In keeping with that last point, I'd like to share a story Corrie ten Boom used to share.  I'm paraphrasing it because I haven't read it in a long time so please bear with me.  After WWII, Germany was in shambles. Before the war, it had been the center of Christian theology, having the most prestigious seminaries in Europe with scholars who could debate the finer points of Christian teaching without end.   And yet, the Holocaust came and millions of lives were lost.  The church, intellectual as it was,  clearly was asleep at the wheel and European Jewry nearly perished as a result.  After the war, the leading ministers were fragmented and combative (argumentative) towards each other, pretty much as they had been before.  There was no spirit of cooperation among the Christian leaders.

It was in that atmosphere that Corrie found herself when she tried to speak at a pastor's conference.  The divisiveness over peripheral issues was so strong that God was not free to work in  the hearts of her audience; their hearts, which were supposed to be made of flesh,  seemed to be made of stone.  Finally, she brought a box of chocolates to one of the meetings. Chocolate was a rarity during the war years and afterwards.  The leaders were very grateful for this unusual treat as they ate the candy. Afterwards she told them that they didn't eat the expensive treat properly. They were surprised and protested that they didn't know what she meant.  She said something like, "You didn't check out the chocolates.  You didn't ask me if they were from Belgium, Holland, or Germany.  You didn't debate which was the best chocolate or what was the best way to eat them."  They protested again - that chocolate is simply meant to be eaten.  She replied, "So is the Gospel." One of her favorite sayings was that in nearly 8 decades of serving the Gospel to sinners, there was always plenty for everyone:) 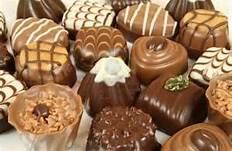 If you belong to Jesus and He lives in your heart, it doesn't matter to me if you are a-millennial, pre- millennial, or what. (When Corrie first heard these terms, she went to a pastor and said, "Pastor, what does a-millinial, pre-millinial, post-millinial mean?" He replied, "Corrie, that is a pre-post-terous question!")  I also don't care if you speak in tongues or not.  If you are living the Word, sharing the Gospel, loving the Lord and others, we are on the same team.  Nor, honestly, do I care what the sign outside your church says.  (As a friend of mine said, please show me the spiritual  fruit that the majority of the congregation, along with the pastoral staff, brings to the table.  Your church can say, "First Pentecostal, Baptist, Presbyterian, Methodist Bible believing, Spirit led, Heaven-bound,  Christ-followers par Excellence" on it (if you can find a sign big enough to hold all that) but if the church as a whole is cold, argumentative, arrogant, insular,  and/or dead, the sign outside means nothing. I need to see love, peace, patience, kindness, meekness, self-control, etc inside).      Ditto for many other issues that, in my (humble!) opinion, serve only to distract from the One who deserves all the spotlight - my Lord and Savior, Jesus Christ.

As a former pastor of mine used to say: Jesus Christ, the one and only!
And His gospel - so simple a child can understand it.
Available for a lost and dying world.

For me, that is what it is all about.
Thanks for bearing with me on this.