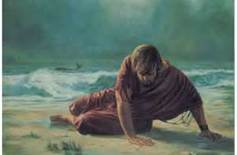 This morning I saw a very, very old, long deceased prophet (or at least the book named after him) through new eyes. Everyone knows about Jonah and the whale, big fish, whatever.  How God tells him (Jonah.. not the fish) to go one way and he goes another.  How a storm comes up and he gets thrown overboard.  How he finds that being in the belly of a big fish is actually a pretty good place to pray even though it had never been used as a prayer room before that he probably knew of.  And then Jonah arrives at the place where he was supposed to go the first time - I love the the first verse of chapter 3:  "Now the word of the Lord came to Jonah the second time..."  Don't you love the fact that God gives us second chances?
Jonah goes with a message that is not PC:  "Forty days and you guys are toast!!!" or something like that.  And the funny thing is: they believed him!  The Assyrians were bad guys, no doubt.  They loved to boil people alive in oil, skin them while they were still breathing, rip pregnant women open... all kinds of nasty things. In a world where torture was pretty much the norm, Jonah's audience stood out for all the wrong reasons. I can well imagine that parents threatened their recalcitrant children with things like:  if you don't behave, little Amaziah, the Assyrians will get you!!!!  And if they did use threats like that, I bet the little Amaziahs of the ancient world straightened up!
So maybe the Ninevites believed Jonah because they knew deep down inside that they were rotters.  I mean how many innocent people do you have to torture before you figure out you aren't in the running for the local Cub Scout of the Year award????  But I'm thinking that maybe they also picked up on Jonah's unspoken attitude towards them.  I mean maybe his secret desire to see them go up in flames empowered his message. Maybe his ragged prophet attire, blazing eyes of anger, and steely voice scared them ... um... straight.    For a while.
And then Jonah is ticked.  He sits down under a nifty, shady plant and unloads on God.  I told You this would happen!!!  Now look where this has gotten us!!!  These people are the ancient world's worst nightmare and now You can't wipe them off the face of the earth!!! What a bummer!!! God!!! You should have seen this coming!!!!
And then God sends a worm to kill Jonah's shade plant and gives him lesson 101 about not being a hater....
Today it hit me that the book is not about Jonah at all.
It's about God.  Not the big fish.  Not the wild-eyed prophet.  Not doom and destruction or even about mercy. It's about the heart of God.
Verse 11 in chapter 4 says:   "And should I not have compassion on Nineveh, the great city in which there are more than 120,000 persons who do not know the difference between their right and left hand, as well as many animals?"
God loved the Ninevites.  He didn't approve of what they did. But still He loved them.  So much so that He sent a decent Jewish man named Jonah to warn them to repent so that they could receive mercy.
The reason this story hit me in a totally new way was because of what Gracia Burnham said yesterday at the Voice of the Martyr's conference.  She said that before she was captured by Muslim terrorists, she had been raised in a Christian home, married a missionary pilot, and been the mother of three neat kids whom she was home schooling. She felt she was a good person.    But when all that was taken from her, when she and her husband were suddenly just hostages and their world was reduced to marching for long hours between their captors, foraging for food and hiding places, climbing up steep mountain sides or wading through wet lands with muck coming up to their knees, she saw a Gracia that she didn't know existed.
When the guys mistreated her husband (he was chained to a tree every night for a year) or some of the other women hostages, when one would encounter an innocent pedestrian and behead that person in order to steal whatever the hapless guy had and then the murderer would come back to camp, blood all over his shirt, just pleased with his booty, she hated them.

Towards the end of their year in captivity, the terrorists were cut off from their source of food. Up to this time, food had been scarce but now it was non-existent.  They weren't in an area where they could live off the land so they had to ration what little rice they had left.  They divided up the rice each evening between themselves in equal portions and then gave Martin and Gracia smaller portions.  Martin and Gracia were already skin and bones and this stinginess was hard to bear.  They would often take their food and go back to their vine-made hammock and grumble about the unfairness of it.  She was envious of those who got larger portions.
And then there were days when she just bottomed out. Frequently.  She would sit and cry or turn to her husband and ask, "How long does this have to go on?  How long???"  And her husband would say, "Gracia, each day is another day when these guys have a chance to experience God's grace, to realize that He loves them, and to choose to do the right things instead of the wrong things.  Each day of our captivity is a day of grace for them, a chance for them to get things right."  But still she would despair at times.
She said she didn't like this Gracia that she was seeing - the one who hated, was envious, and who was often in dismay.
And I don't know how to explain this well, but basically this morning when I had the luxury of sitting in my Sunday School class and listening to the lesson on Jonah, it suddenly hit me that God lavished the days of two of His best servants, and even the life of one, out there in the jungles of the South Philippines on people that very few could possibly love.  Most of the Philippinos, Christian and Muslim alike, hated these terrorists.  When some ended up in prison later on, the other inmates would have nothing to do with the Abu Sayyeff guys.
Until they read Gracia's book, In the Presence of My Enemies, and realized that if she could forgive these guys and reach out to them after her ordeal was over, then they could reach out to the Abu Sayyeff inmates as well.
Now, Gracia supports 4 of her former captors, sending them money each month so they can buy a few necessities in prison. She corresponds with a couple of them. And she rejoices when she hears that a new one is in prison and alive as opposed to having been killed by the military. Because as long as these men are alive, they still have a day of grace in which to turn to God, experience His love, and do the right thing.
What I'm saying is that God really does love the world.  He loves the unlovely. He loves those that men despise. He doesn't approve of what they do but He loves them.  He loved the brutal Assyrians back in ancient times and He loves the terrorists of today.

And sometimes He sends His choice servants into the enemy's lair simply because...
He loves.
Posted by Unknown at 4:31 PM