Of Boogey Men, Storms, Songs in the Night, and Other Things...

I am really, really afraid of severe storms and have been since I was a child.
My maternal grandmother, who is now with the Lord, was terrified of storms among other things and I spent a lot of time with her when I was a preschooler so I figure I got my fear from her.  She also  taught me to be afraid of the Boogey Man (not kidding) - an invisible being who was capable of opening the bedroom window from the outside in order to grab me and drag  me off to parts unknown for reasons I never understood.
She also taught me  to be afraid of the dark and at the same time  to be afraid of  "peeping Toms" who were drawn to lighted windows - a paradox of immense proportions for me. (Incidentally, she lived out in the countryside where our nearest neighbor was a herd of cows and I never caught any of them standing on their hind legs with binoculars in their front hooves staring through the curtains at us, Chick-Fil-A notwithstanding.).
She also established a bedtime ritual which has remained alive in my memory, lo these many years.
This little short woman, somewhat hunched over, would watch the 10:00 news and comment on every murder, serious car wreck, massacre, or whatever Chet Huntley (or whoever he was) would solemnize.  All the while I sat on the floor surrounded by my baby dolls, sucking my thumb, staring wide-eyed at the specter of local and world chaos which was being brought to  me via her black and white t.v. screen. (Thank goodness they didn't have internet or widescreen t.v.s, CNN or FOX news 24/7 back then.  If they had,  I probably would have spent the rest of my life curled up in the fetal position, sucking my thumb).
Right after the news, she would get a broom and sweep any dirt or dust into the center of the house.  She always wore a house dress, hose, and thick, black, hard-soled shoes and as she swept each room, I would follow closely behind her, knowing that the next thing was lights out which meant the house was about to become the Boogey Man's domain for the next ten hours or so.  Joy...
After the trash had been deposited in the wastebasket and the rooms passed her inspection, she would go through each room again, her big black suitcase of a  purse under one arm (so the Boogey Man wouldn't get it) and a flashlight in the other.  I can remember to this day literally clinging to her skirt at that point, my eyes glued to that small circle of light on the floor as each room turned from light to dark and our world narrowed down to what only the flashlight could reveal.  I also remember that her shoes sounded like gunshots going off to my small ears as she clomped across the wooden floors.  Let's just say, bedtime was nerve-wracking... 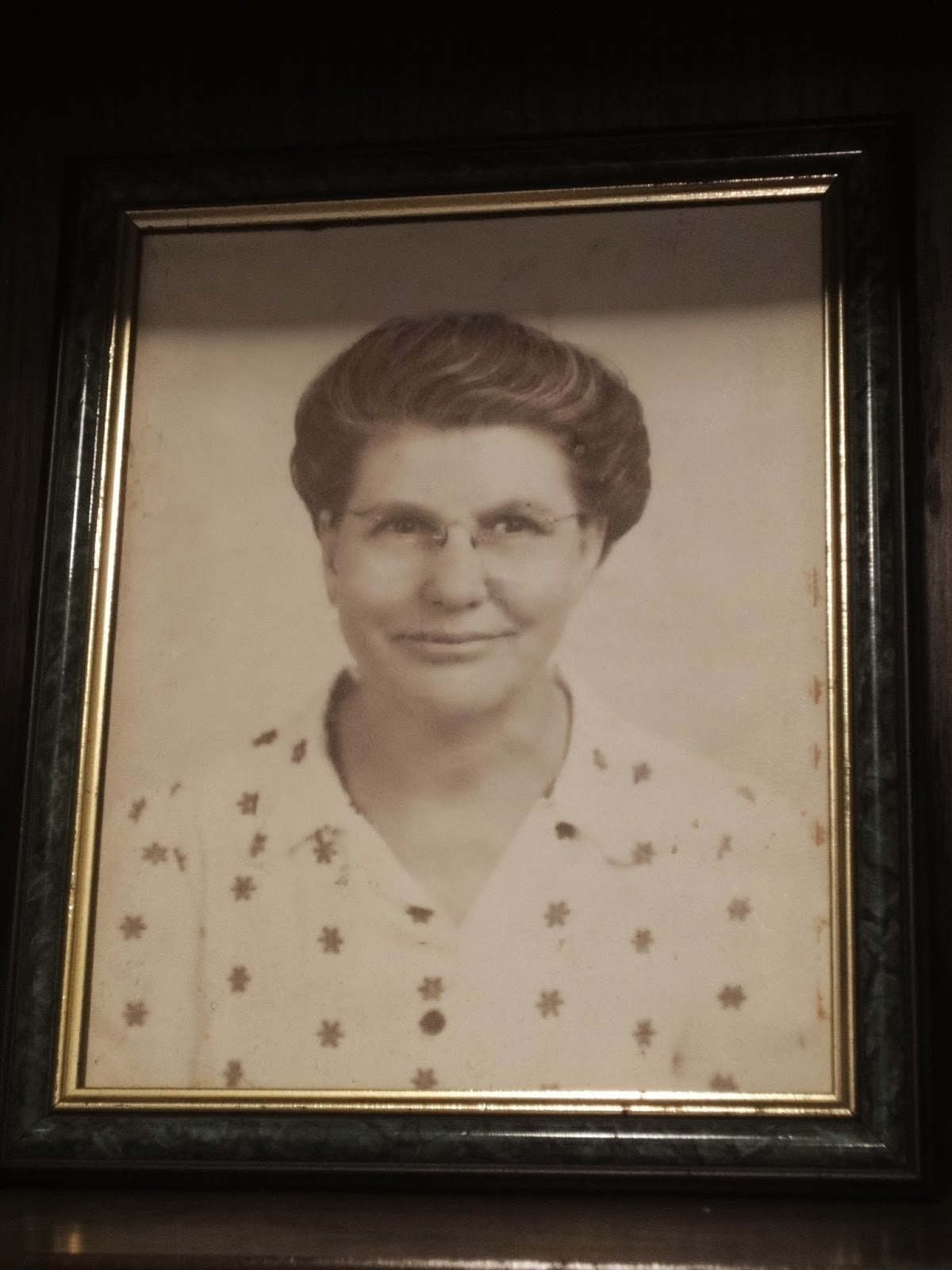 I slept in the same room with her although the word "sleep" is a little misleading.  She had mice or rats (Or both) in the attic and in the top of her closet and that didn't bother her too much. She'd put out rat poison from time to time but essentially she was really, really hard of hearing.  So almost as soon as her head hit the pillow, she'd be snoring while I'd lay huddled in bed listening to the rodents have a "big time", as she would have said, romping around in the top of the closet next to us.  To this day I hate mice!
My grandmother loved me, no doubt about it.  But she had a unique view of things.  She taught me to wear clean underwear -  in case I was in a car wreck and had to be taken to the hospital. (And in fact, when my mom was  a teen-ager, she would wake my mom and my uncle up in the middle of the night when it was really stormy... and make them put on their Sunday best in case they got blown away in the middle of the night.)   She was terrified of death; my mom had known Grandma to leave every light on in the house  back in her younger days when a relative or friend passed away.  Yet she seemed to love funerals as she got older.  She literally perked up at seeing people at a funeral service - people she hadn't seen in a while - and we used to marvel at how visiting at funerals seemed to animate her to no end.  Ditto for standing around and visiting after Sunday night preachin' while we kids played tag until I was the only one left - at which time I became fodder for the mosquitoes buzzing around the church's Night Watcher which propelled me into whining and pleading until grandma finally said good bye to her friends and we headed home.
But I digress...
I am really, really afraid of storms, the dark, and being caught in a car wreck wearing underwear that is less than pristine.... Ha!  The underwear is not a problem - I have a washer and use it frequently (in case you are wondering.) And the dark is not a big deal because I have electricity, candles, and a flashlight.  Storms are a different matter....
And it had been predicted that we would have a doozie  of a weather system passing through our area sometime Thursday evening.
My poor husband had been sick the night before and was exhausted all day Thursday so he came home early telling me he had to get some rest.  That, of course, worried me...  My first thought was, "The storms will interrupt his sleep and he'll be in even worse shape on Friday."
Not so. 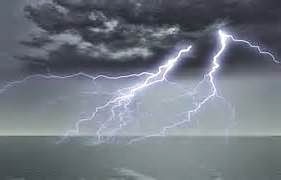 He was sound asleep when the storms came but I wasn't. And neither was our Pomeranian mix, Buddie, who is also terrified of storms.  So, yeah, we both ran to the bedroom at the first boom of thunder.
Another ground-shaking burst of thunder and I didn't care if I woke Phil up or not - I leaped into bed (no small feat at my age) and plastered myself against him. In fact, if I remember correctly, I tried to position myself so that he would be like a human shield if tornadic winds started to suck us up into the rafters. If we went.. he was going first!
Okay.  Phil is a really, really sound sleeper.
He almost came to  - not quite- and mumbled a question - something about me being alright?
I assured him I wasn't.  He kind of nodded and then resumed snoring while I held his arm in a sort of vice grip.  That was fine with me. I wasn't looking for conversation, just the assurance that if I went, I wouldn't be going alone!
Then Phil began to squirm around and mumble something else, like, "uhhh... 'kay... Buddie.. goooood dog... get... off...my.. feet..  goooodddd dogg... "
So I now knew that all three of us were in bed - me clinging to Phil's back like an overweight limpet while Buddie was anchoring  Phil's  feet to the mattress, all the while shaking like a leaf no doubt -   while all heck was breaking lose right above our heads (or so it seemed to me.)  And still Phil managed to sleep.
At one point,  however, I did feel the need for verbal reassurance.  The weather had whipped itself up into such a frenzy that I seriously thought I was just a few minutes away from Kingdom Come,a place I hadn't really planned on visiting at 1 a.m. last night. Without any hesitation or compassion, I got right in Phil's ear and bawled, "I AM TERRIFIED!!!
And the point of this story?
Grandma may have put the fear of something or other in me (some of which was necessary!) but thankfully God gave me a husband who is both a sound sleeper and also pretty fearless, not to mention compassionate and one who loves the Lord.
My frantic message must have gotten through to him because he grabbed my hand and, to my amazement, began to sleepily sing the words to a hymn!    At first I thought he was crazy but within seconds I was listening to the words of the song,  All Hail the Power of Jesus' Name.  And then, after he had fallen back into a fitful slumber (no doubt) I continued to sing quietly as  the storm quieted down  within and
without me.
Wow!  My grandmother was a great lady (quirky and fearful but a great lady).  But she can't hold a candle to my husband who taught me a valuable lesson last night - the secret of singing about Jesus in the midst of a storm!
Today I saw a picture on FB that said, "If your husband is your best friend, share this!"
Did I post it on my FB?
You bet your sweet bippie I did...