Pivotal moments.
This past weekend my husband and  I went to Memphis to spend some time with family.   The fellowship was good but there were problems.
Our hotel was not 5 star. Or 4 star. Or 3 star.  Unless elephant dancing in the halls accompanied by loud screaming, laughing, yelling, and pounding on doors from 10 p.m. to midnight is considered desirable.  We're not into any of those things so we'd give the hotel a 2 star rating at best.  In one Muppet movie, the characters stay at a seedy, run-down, no frills place called the Happiness Hotel. Suffice it to say that after the first night in this miserable abode, my husband and I started referring to it as the Happiness Hotel of Memphis.  Will we ever go back? No.  Does any one memory stand out from our time at that place?  Yes.  I distinctly remember lying in bed our first night there, about 11 p.m., while my husband looked through the security peephole into the hallway.  I prayed while he tried to decide whether to call the desk and risk retaliation from our rowdy neighbors for turning them in or to just let well enough alone and move to another room the next day. (We moved to a quieter floor the next afternoon after complaining about the ambiance (or lack thereof) on the first floor). Praying for physical safety and wisdom in the dead of night in a strange place could have been pivotal - but it wasn't.

In this flat, rain-soaked earth, desolate and unpeopled except for us, we both realized that none of that mattered.  Somehow these people lived and died and they made it to their appointed meeting with God.  And when it came right down to it, for most of them no one was now left alive who knew about their struggles or who could tell you what they owned, what they didn't own, what they worried about, and how they managed to get through life.
The point is: they did.
I can't explain it but in that quiet, still place both of us suddenly realized what is and what isn't important. And we understood that all the things that had irritated us on the trip, frightened us even, would some day be long forgotten while we ourselves would be with God.
It may sound morbid but it wasn't.
The next day I looked up my friend's grave site on the net and realized that we didn't have the right cemetery. Same area but a few miles further east, back the way we had already come.  In other words we had already passed it in the downpour before we ever stopped. I apologized to my husband and to my surprise he told me that he was glad we had stopped, that it had put things in perspective and lifted some of the cares from his shoulders, just as it had done for me.  At that point we realized that the time we spent driving around that plot of ground had been pivotal for both of us.
Epiphanies come in the strangest of ways, unannounced and unbidden. They change our perspective in a moment of time, stripping away illusions and distractions.  Ours came in the middle of a rainstorm somewhere in the middle of nowhere and we know God was in it. 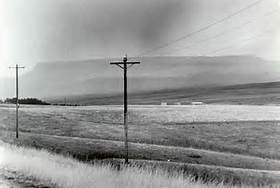