Friendship.
This past weekend I went to a retreat with a friend whom I first met back in 1997, when we both lived on the same street and had young children.
Looking back, I can see that our friendship was born out of  shared sorrow.  And it started with me reading the obituaries.
Let me explain:  I lost my parents in Dec. 1995 and then about 11 months later had my own brush with mortality when the doctor thought I might have uterine cancer.  (Fortunately I didn't.)  However, about the same time that I was dealing with my own health issues, my neighbor and surrogate dad went on to be with the Lord.
So 1995 through 1997 were, for me, filled with medical stuff, loss, and not a little trauma.
I think all of this, in the providence of God, gave me a sort of "antennae" for others who were going through loss and/or medical woes.
I don't normally read the obituaries but one day I did and I saw that someone on our street had died.  I didn't know the family but decided to take some food to them.  My next-door neighbor - the one who had just lost her husband - said that  she wanted to do something too so we both conjured up some food and then I took it down our street to the residence that had been listed in the paper.
I remember to this day feeling a bit nervous, wondering how my unexpected presence on a strange doorstep would be received, etc.   I also remember vividly the door opening and two women standing there, one behind the other.  My yet-to-be-friend was the one standing behind; another relative was the one who had opened the door.  Grief was deeply etched on my  future friend's face and I instantly felt a kinship with her -  I could sooo identify!
Fast forward to this past weekend - sixteen years later!  We got to be  roomies at a Christian retreat and during that time we laughed, cried, questioned, debated, and reminisced with each other and it was all - all-  a blessing.  Our kids are grown now, our hair is a little greyer now, and we are both acutely aware of how much time has swept under the bridge since we first met.
At one point during the retreat, I thought, "Wow! Isn't it lucky that I happened to read the obituaries on the very day when the  article about my friend's mom was in it!  Look what came out of it - a lifelong friendship!"
And then I  thought, "No,wait a minute!  Who am I kidding?  That was most definitely a God thing..."
And then my heart lifted in praise. "Wow, God!  You orchestrated this whole thing!  Amazing!"
Truly, He is... 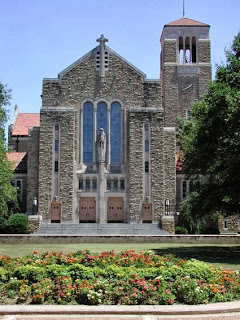