It's so easy to fear.
My husband is a mechanic.  While the verdict is still out, he does have a back injury of some sort and for a mechanic, that is not good.  He can still work but, clearly, he isn't totally well.  As he puts it, he has a rolling gait now and carries an Aleve in his pocket.  So fear is a temptation knocking at my door.  Accompanied by several "what ifs".
There are other fears as well, unrelated to Phil's accident, his ability to work, and/or to future medical issues.  Perhaps it is not the same with you but with  me,  somehow one fear never comes alone; it  always brings company.  Sort of like when Bilbo Baggins opens his door, over and over, to an endless stream of uninvited guests who come into his peaceful little Hobbit hole, make themselves at home, muddy his floors,  empty his cupboards, basically take over,  and  ignore him.
So as soon as I woke up today, one fear after another came knocking at my door.
Thankfully, something else came my way -  one simple instruction from three different sources.. First,  I simply opened a new Bible I had ordered in the mail - it arrived while Phil and I were out of town - and when I opened it, I saw that the passage in front of me was a narrative that I have loved since childhood. Really, it is my favorite narrative in all of Scripture. (II Kings 6:14-20).    So I started reading about Elisha's servant - a man who freaked out and rightly so.  One day he opened the front door and saw that a huge army had slipped in under cover of night and now encircled the place where he lived.  He wasn't a rocket scientist but it didn't take one to know that the chariots and horsemen had come for the Elisha and for him as well, a man close enough to be tainted by association.
The servant ran to Elisha, the guy who hadn't gotten him in this predicament, and  basically cried out, "What on earth do we do now????  Our goose is cooked!!!"  (Arkansas translation...)
Elisha responded:  "Do not fear, for those who are with us are more than those who are with them." And then this prophet of God prayed that the servant's eyes would be opened.   God did indeed open the servant's eyes and with that, he saw that the whole mountain was full of horses and chariots - of fire. Not your standard army.
Okay. I got it.  "Lord, there's no need to fear. I just need for You to open my eyes."
About an hour later, I decided to open the new hymnal I bought in Tennessee last week.  I opened it at random, looked down and saw, "Open the eyes of my heart, Lord.  Open the eyes of my heart.  I want to see You..."
Okay. I got it.  "Lord, I need You to open the eyes of my heart."
Then I started weeding out my collection of books - I have waay too many and feel the need to downsize as I get older.  I pulled out one thin paperback volume, a book I didn't even remember buying, sad to say, and opened it at random.  The book gave short synopses of various Christians who have stood out from the crowd for one reason or another.  I saw that the book had opened to the chapter about John and Betty Stam, a story I'm familiar with already so I decided to flip through the book and see if there were any other stories that I might want to read.  However, as I glanced at the page, something arrested my attention.  I saw in the top left-hand corner a few lines from a poem:
"Open my eyes, that I may see
This one and that one needing Thee..."
Three times now. In the space of about 2 hours.  From three separate sources.  "Open my eyes that I may see..."
Okay, Lord. Maybe I'm not getting it... 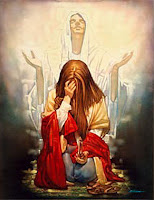 Or maybe this was all just coincidence - like when you buy a new car and suddenly you see that same model everywhere you look.   (I just now looked in the book, Amazing Faith: Stories of Christians in Defining Moments in order to find out whether the quote was from a poem, a hymn or what.  When I turned back a page, I saw that Betty had written the verses when she was a freshman at Moody Bible Institute and had titled it, "Open My Eyes."  Okay. So maybe not a coincidence...)
Next,  I thought about each of the three phrases as they appeared in context.
The first narrative deals directly with fear.  The servant in the story is freaked out until God draws back the curtain, so to speak, and shows this frightened man that he is not outnumbered and that there is help all around him, invisible to the unaided human eye, but real nonetheless.  In other words, he's not toast.  God's got his back. 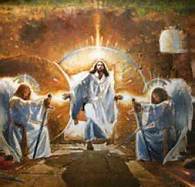 On the other hand, the hymn deals with something that goes beyond putting a band-aid on human fear; it deals with a longing to see God Himself, "shining in the light of His glory,"  a deep heart-cry to see the One we love - a desire, if you will,  to be like Moses who, "...not fearing the wrath of the king... endured, as seeing Him who is unseen." (Heb. 11:27)
The third reference was a plea from a young woman, asking God to open her  eyes so that she would be motivated to serve others.  Basically she was asking God to help her see others the way He sees them, so that she would be drawn to help them the way He is drawn to help them.
I hate it when my glasses get wet; I can't see anything.  Fear is like that - when it clogs my vision, all I can see are myriad droplets of "what if's" and "yes, buts..."   Today I realized that my greatest need is not for my husband to be well, although I pray for that, but  for God to open my eyes so that I can see that He is able to meet our needs - physical, emotional, financial, spiritual.   That He can give us wisdom and endurance as well as a stronger faith; whatever we need, He can supply it.

So when I started out the day, my greatest perceived need  was for God to deal with the Fears trying to gatecrash my heart -  for Him to  send them all running  with their tails tucked between their legs so to speak.  (Another great Arkansas expression!) Essentially I needed Him to open my eyes to the reality of His endless resources.  (As our son prayed today:  "Lord, do what You have to do to help us..."  I like that.)
Beyond that, I needed to see my Savior, "high and lifted up, shining in the light of ...[His] glory..."   I didn't just need a band-aid for fear, I needed to be prepped for service.  "Seeing" God in His holiness is a prerequisite to serving Him, I think.
Then, at this point, I was ready to have one  more spiritual cataract removed. I was ready to  ask Him to open my eyes so that I could  see the people around me with 20/20 Heavenly vision.
He is so gracious. He knows we are but dust and deals with us where we are and often, that is in the pit of despair. But He doesn't stop there.
Knowing that He's got this when it comes to my own fears,  I can leave all that to Him; then  having a mental imprint of His majesty fixed on my heart,I can  follow Him; and at that point, He opens my eyes to the people around me, who may be disguised as  paupers, bourgeoisie, or kings, but who in His eyes are all the same: spiritually needy and greatly loved. By Him.
And hopefully by me.
After all, they have fears knocking at their doors too.