From One Pitiful Pot to Another ;)

When I was a college student,  pop psychology books were extremely popular; my mom and I both read them.   Somewhere along the line, she garnered this bit of information:  when a person loses  their keys, it indicates a negative attitude toward the home and the authority the home represents.  From that time on, whenever I had to hunt for my keys, she either asked me questions to try to determine why I was unhappy with our home life or, if she was having a bad day, she lit into me for having a bad attitude and not appreciating the home she was providing for me.  After a particularly stormy session over lost keys, I would make every effort to keep up with my keys but eventually, history would repeat itself...
When I got married, I lost my house keys and  my husband immediately went out and bought a key holder and nailed it to the wall by the carport door so that every time I went in or out, I could hang my keys there or grab them as needed.  After that, I didn't lose my keys anymore...

Before you become critical of my mom for jumping to a wrong conclusion (after listening to experts, no less...), you might consider this. I once heard a story about a woman, a devout Christian, who had suffered much in Europe during WWII.  Later, many years after the war, she was at a meeting where she had the opportunity to visit with an American woman. She told the American that people in the U.S. didn't really understand suffering the way Europeans, who had lived through the war, did. Only, as it turned out, the American woman she was instructing, well, that woman  happened to be Marj Saint.  Marj was a widow with young

children at the time -  her  husband, Nate Saint, having been speared to death in Ecuador in 1956 while trying to share the Gospel with an unreached people group.  When the European lady realized who she was talking to, she was immediately contrite and asked forgiveness for jumping to an erroneous conclusion. Again, the European woman had some facts at her finger tips and they were real... Europeans did suffer more deprivation and violence during the war years than Americans did.  The problem was: she just didn't have all the facts.
And then there's... um... me.
Just the other day I got really upset with our son for leaving something valuable in his car. I ran a litany of statements through my mind, none of which were good or commendable.  I wondered how he could be so irresponsible (having, apparently, forgotten the many times I misplaced my house keys when I was his age). When he came home and I confronted him with his forgetfulness, he simply said, "Mom, I knew I left that in the car. My car looks like garbage. All the door handles are broken except for one and I always keep the one good door locked...   Why would anyone want to go through my car looking for something valuable?"
Well, I still wish he wouldn't leave valuable things in  his car but... I realized that A) he had a point and B) I had misjudged the situation. I thought that, like me, he simply got out of his car and forgot to bring his GPS inside with him.    I was wrong.  (Even though, to some extent, I still think I'm right! :)
I guess my point is that we can see and hear things and decide that A) we have all the facts - when in reality we may have only  a few facts or even skewered facts  and B) we are able to judge, not only the little that we observe, but also the thoughts and intents of the heart, the things that we don't and can't see.
While it is true that we are to discern right actions from wrong ones,especially when it comes to our own lives,  we have to realize that God is the only one who has all the facts and He is also the only one who can see into the hearts of others, He is the only one who is qualified to judge motives.
One final example: a woman got into an elevator. She was nicely dressed and appeared confident as she stepped on a man's foot and ground her spiked heel into the toe of his shoe. She moved her foot but not quick enough for him plus she didn't say anything to him.   He was very angry until, as they got off the elevator, he realized she was blind.
Really, the older I get, the more I think we are all blind to some extent.
Only God has 20/20 heart vision and, really, when it comes down to it, only He has all the facts in any given situation. (If you don't believe that, read varying accounts of the same news event or observe a courtroom trial sometime).   I think that is why the Bible says that we are to be diligent to examine our own hearts and equally diligent to  leave the judging of others to Him.  If we set ourselves up as ones who can judge the thoughts and intents of of others (as I have done many times!), we are basically usurping His rightful place. And I don't know about you, but personally, I have come to believe that that's a dangerous place to be.
"So speak and so act, as those who are to be judged by the law of liberty.  For judgement will be merciless to one who has shown no mercy; mercy triumphs over judgement."  James 2:12 - 13  Emphasis is mine. 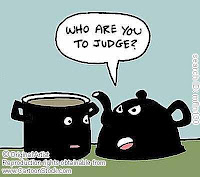