Pink Balloons in a Sepia-tone World

There are watershed moments.
I'm still processing the homicide that happened three weeks or so ago at the house on the corner, across from us.
I think it's not affecting me.. .but then I realize it is.
This morning I realized that it's taken away my desire to blog. Left me feeling like I have little or nothing worthwhile to say. Or maybe feeling like I have nothing worthwhile that I want to say.
It's almost as if something inside of me died when a virtual stranger - someone I only knew by sight - was beaten to death while I watched but didn't see.  Wondering if it was serious this time.  Wondering if I should call the police.  The answer was... yes.
Even now - now that I've let the nasty genie out of the bottle this morning - I'm shedding tears.  I don't even know how that can be.
Three weeks later and I can still burst into tears???  Without warning?? For someone I didn't even know???
I bawl and ask myself hard questions like: how do people in war zones cope with violent deaths?  As in "plural", "many", sometimes "daily".   I don't know.  I can't comprehend it.  Syria.  Iraq.  Darfur.
So I sit and sob for one person and shut global stuff off for a bit because it's more than I can handle.
Last week I had an unannounced melt down accompanied by a temper tantrum.  Uncharacteristic of me and definitely not pretty.  Geriatric women should not have temper tantrums...
But I did.
Some things didn't go the way I wanted, some relatively inoffensive words were said that I took offense at, and before I knew it, I was yelling. Things like, "God is not working in this neighborhood! He never has been!!! "
I went on to yell about how I've been wearing rose-colored glasses all these years, how nothing good is ever going to happen in this place. If I remember correctly, I think I also yelled words to the effect that we'd all be murdered in our beds someday while I threw the book I was reading at the wall as a way of punctuating my atheistic rant.
To say David and Phil were walking on egg shells for a bit there and talking to me in honeyed tones as if I were a candidate for a psychiatric ward - that would be understatement.
The next day I sobbed off and on into the dish towel or hand towel that was nearest me and apologized. To God. To Phil. To David.  But I wasn't even sure I could be forgiven.  I wasn't even sure why I had come unglued.  Finally I asked God why I had lost it and He showed me it was Sammy's death.  Still there. Still waiting to surface at odd moments.
This past Tuesday we had Bible study here and three ladies came. One is a dear friend from many years back who used to live down the street from me. The other two women were not friends. When I'd see them in their yards, we'd exchange friendly words. But they had had scary issues in their past - domestic violence, possibly drugs - and I had carefully built a wall between myself and them.  Sometimes I spied on them, when I thought things might be getting out of hand, things that might spill over into my life. Sometimes I called 911 on their spouses.   But that was about the extent of our relationship.
Now we're in a weekly neighborhood Bible study together.
Our symbol is becoming pink balloons.
We stand on level ground at the foot of the cross, shed the same tears, have the same fears, and are journeying together. I no longer spy on them or avoid them. I love them. That's God.
I no longer see myself as the leader, the one who has the answers that they need - because I simply don't have a lot of answers right now.   I just have some of  the same questions they do. The only difference is that I know where to take them.  But basically we all have more questions than answers right now and I think  that's okay because we're in it together. 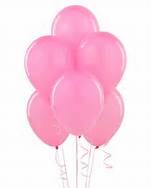 Today I'll take the handout for next week, some pink balloons, some chocolate, and a brightly colored box of Kleenex tissue to leave on each woman's doorstep. It beats the heck out of spying on them, fearing their situations, and calling the cops occasionally to their homes.
Three weeks ago we all had  a watershed event courtesy of these mean streets and life is still a bit sepia toned for me as it is for my sisters in the 'hood. We're all still blindsided by tears occasionally.    But as long as we can cry together, pray together, eat chocolate together, open the Word together, and leave pink balloons  on each other's doorsteps, there is hope.
And yes, God is working in our neighborhood.
But mostly, He's working on me.
And He'still got a lot of work to do.
Trust me on this.