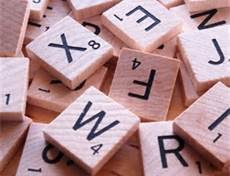 R-e-m-o-r-s-e.
The tiles were just sitting in my wooden Scrabble holder, begging to be played.  A "bingo" that would earn me an extra 50 points - I could see the word right in front of me and was practically salivating over this opportunity.  However, no matter how hard I tried, I finally... remorsefully... had to admit to the Rat Terriers at my feet  that the board was so "closed off" that I couldn't bingo even if I were allowed to enter words in several different languages including Pig Latin.   Bummer!
Earlier, when the board was wide open, I think I got every u, i, o, b, and c from the Face Book Scrabble Tile Dispenser Wizard whom I've never seen and whom, at that point, I was sure hated me. The Rat Terriers heard comments from me like:  Come on!  Give me every useless vowel in the game when I can make words right and left and then give me obvious word combos when there is no place to play???  What kind of game is this???
Needless to say, even with several potential bingo words, I lost...
But it really doesn't matter because I'm addicted... :)
The thing about Scrabble is this: when I score well and win, I am secretly pleased with my word knowledge.  When I lose, I'm secretly unhappy with the quirky luck inherent in the game.  (And by the way, there is really, really something wrong in the logic of what I've just written...)
For example, in a recent game, I decided to enter the word "que" and even pressed the button to do so.  I thought I had tried that word in the dictionary dialogue box on FB Scrabble and it had been approved but obviously I hadn't.  The game wizard rejected my entry. What to do??
I knew the word "quire" wasn't going to work either  but it was all I could make with the letters I had so I tried it in the dictionary box and, lo and behold,  it popped up as valid.  Amazing!  Even now I honestly  don't know what the word  means and frankly I really don't care.    Simply because of an electronic reject and a wild shot with the FB dictionary, I got something like a 40 point play instead of a 20 point play.
I once heard  Corrie ten Boom talk about prayer.  She said that a mother was trying to teach her little child to pray.  When it was the child's turn to pray out loud, the little fellow said, "A, B, C, D..."  The mother asked the child what he was doing and he replied, "I am giving the letters to God because He will know what to do with them."
Sometimes down here, I fret and fret, trying to figure out how to "spend" the "tiles" of my life throughout the day, even going so far as to figure out the wording of my prayers in advance, as if it all depended on me, on my  intellect, my goals, my words, and my plans.
Maybe I should just start off the day by recognizing that many of my "brilliant" ideas are partly luck and many of my, well, unprofitable ideas are partly... if not mostly ... me.
Maybe like that little boy, I should start off each  day by bringing all the scattered tiles - thoughts and agendas that I have  - to God and offering them up so that He can arrange them in the way that He knows is best, discarding some of my pleas, changing others, and adding ones I've  never considered.
I mean, it's okay to plot and plan and clutch Scrabble Net tiles in one's greedy little hand so to speak because it's just a game with no cash prizes... Right?
But what about life? What about conversing with the God of the Universe?  Do I really want to clutch my little tiles of life  to myself, plotting, planning, dispensing them as I see fit throughout the day?    Or do I want to give them to God first and let Him do the planning while I sit still, mouth closed, and start my day off, novelty of novelties, by trying to listen?
For once?
Just sayin' 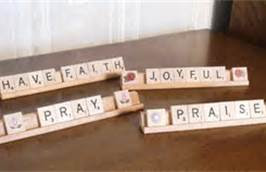