I know the technological age left me behind  long before it ever got here, actually ;)
But that's okay as long as they keep publishing books...
I love biographies and always look for them whenever I am in a bookstore. Unfortunately, I can go for  long periods, even months, without seeing what I would consider to be a good Christian biography.  Today, while others were doing the right thing by spring cleaning their homes, I was at Lifeway Christian Bookstore with my 25% off punch card gripped tightly in my grubby little hand.  (I love punch cards!!  Especially when they are full!!)
To my amazement, they had not one new biography but several new ones!  I showed restraint and didn't get all of them - only got two with my discount card!  (Will probably get the rest on my kindle later on... :)  I haven't read any of them yet but spent  quite a bit of time (we won't say how much...) checking out each book there in the store and probably couldn't have been happier  if I'd been at the Riviera.  (Yes, I am a book-a-holic).
Below I've listed the titles and given a little information about each book because it's a sad day when a good biography goes unnoticed, just sitting on a public shelf somewhere, with no one to love it... :)

1.  Captive in Iran:  A Remarkable true Story of Hope and Triumph amid the Horror of Tehran's brutal Evin Prison by Maryam Rostampour and Marziyeh Amirizadeh.  I have been waiting for this book since early Feb. and had read it wouldn't be released until early April.  Somehow Lifeway already has it and I know it will be good.  These young Iranian women were imprisoned in Evin for the crime of handing out Bibles to thousands of Iranians and in spite of great pressure, they never renounced their faith during the 259 days they were in jail. Instead, they had "church" in the prison and helped others to find the comfort of Christ.  Anne Graham Lotz wrote the introduction and I'll be reading the whole book as soon as I finish this blog! 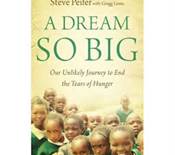 2.  A Dream so Big:  Our Unlikely Journey to End the Tears of Hunger  by Steve Peifer.  I had never heard of the Peifers but in looking through this book, two things came to mind:  1)  By the time I read this, I'll have a much better picture of what life in Africa is really like and 2) this guy is really funny!   Basically the Peifers have been serving in Kenya for 13 years, which is interesting in and of itself because they originally went to Kenya to serve as dorm parents for one year.   Apparently they liked the job... Another interesting thing is that they were not graduates of Bible college.  Steve has a degree in political science  and had been in the corporate world when they decided to take their two kids to Kenya for a year.  The last thing that caught my attention was why they went. Although most of the book is about their experiences in Africa, early on in the book Steve tells why they went in the first place.  His wife, Nancy, was  expecting their third child when the doctors told them that the baby was deformed and would not be able to sustain life.  It was recommended that they have an abortion but they decided to carry the pregnancy to term and care for the child as long as he lived. The boy lived 8 days and his passing left them with a huge void in their lives. Afterwards  in a series of events, God showed Steve that they needed to get away for a while and then opened the door for them to go to Kenya.  As the book says on the back cover, "After one life was lost, tens of thousands were saved."  But again, I also liked the humor in it. At one place in the book he describes bargaining for an item at the local market. The seller quotes an astronomically high price for the item. Steve looks at him and says, "You must think I'm rich and dumb."  The seller looks at him in all seriousness and says, "I didn't think you were rich." I think it's going to be not only an enlightening read but also at times, a  hilarious one.

3.   Taylor's Gift:  a Courageous Story of Giving Life and Renewing Hope by Todd and Tara  Storch.  This is the book I didn't get but can't really forget.  As I browsed through it, I felt over and over again that it had rich spiritual insight as well as gut-wrenching reality.  I don't doubt that I will read it in the future, just not today. It is a hard story as Max Lucado says in the forward.  Basically Todd and Tara lost their young teen-age daughter in a skiing accident.  Their grief was overwhelming and they are extremely honest as they talk about their walk through the valley of the shadow of death.     At times for Tara, it was more of a crawl than a  walk.  At one point, she basically quit even crawling. However, the key note is hope, as the title implies. God brought them through this horrible experience and then opened doors for them to meet the recipients of Taylor's organs, even before the donor association was ready to let them do that.  So the story is not just about Taylor and the accident that took her life but it's also about how God showed up during moments when they had no hope or when one (or both of them) was so angry with God that they couldn't stand it.    And then the book, amazingly, tells the story of each person who is alive today because of Taylor's Gift - definitely heartwarming.  I'm thinking for an honest, no-platitudes-just-faith-stumbling-through-grief book, this is very valuable.

I guess it's also interesting to me that while each book that I've described is about loss, every narrative seems to be about finding life again by ministering to others.  Maryam and Marziyeh lost their freedom and Marziyeh lost her health temporarily but they focused on starting a church right under their captor's noses. The Peifers handled their loss by going to another continent and falling in love with needy people who seemed to them to live more than a world away as they adjusted to what appeared at times to be like life on another planet.  And the Storch family have started their own foundation to promote organ donation  - the main reason they wrote the book.

Which leads me to end this blog with a prayer that my mom had hanging on our wall at home and that I once cross-stitched.

O Divine Master, grant that I may not so much seek
to be consoled as to console...
to be loved as to love.
For it is in giving that we receive...
And it is in dying that we are born to eternal life.
- St. Francis of Assisi
Posted by Unknown at 10:09 PM