How Near to His Heart Do You Want to Be?

People suffer all the time and we can only pray for so many.  So I try to pray for those the Lord brings to mind and  more than once, when I've asked God to lead me to pray for whatever is on His heart, the next thing to cross my mind has been the names of people whom I know are in prison for their faith.  Since this has happened several times, I feel safe in saying that His children who are suffering for their faith are very dear to His heart, which should come as no surprise.
Back in the late 1970's, I first heard about Christians being imprisoned in communist Europe through a book called God's Smuggler.  I think I probably thought it was a spy novel - that's about all I read back then. And in a way, it was.  However, not the kind I normally read :)  This book told about a Dutch man called Brother Andrew who had been smuggling Bibles into the "Soviet satellite" countries of Eastern Europe for decades. It was, for me, an eye-opener and I can still remember sitting on the floor of my bedroom - my favorite place to sit but I'm not sure why - thinking about what I'd just read.  Could it be true??  Were people languishing in jail on the other side of the world simply because of their faith???  Didn't that just happen in ancient Rome, like when they fed people to lions???
At that time, you could request more information on the persecuted church from Brother Andrew's organization, Open Doors, so I did that.  In the packet that I received, there was a little key chain with the picture of a  Volkswagen on it since Brother Andrew drove a Volkswagen all over Eastern Europe, with Bibles hidden away throughout the vehicle.  I carried that key chain for a long time as a reminder to pray for the persecuted church and in fact, I still have it.
While I was still carrying that key chain, I visited California and found myself in a room full of, not movie stars per se, but still what I would call "Hollywood oriented" people - people whose tans were perfect, hair was perfect, make-up perfect, clothes stylish and expensive - basically a room full of people who seemed a bit strange to this Arkansas girl.  Several of them had been married to each other at one time and they all just seemed to be one big happy family in spite of divorces and remarriages, which also seemed strange to me, coming from a state where jokes were plentiful about "shotgun weddings" and  the divorce/remarriage route was usually not a way to make new friends and keep the old ones too...

At one point, a slender, attractive woman picked up my key chain and asked me what the symbol meant. I told her. She said something to the effect of, "Oh! Isn't that negative?  Wouldn't you do better to think about positive things?"

Well, yes... I suppose I would do better, maybe...  But what about my poor brother or sister in Christ who is chained to a wall somewhere or enduring another beating simply because they believe in Christ? What about my sister in the Lord who has just become a widow because her husband was executed simply  for the "crime" of being a pastor?
Over the years, I occasionally still hear comments like, "I don't want to think about that stuff... That's depressing."  And I know the people are well-meaning and I understand their point.
But I always reply, "If you were in prison for your faith, would you want others praying for you?"
That's partially why Hebrews 13:3 tells us to remember those who are in prison as if we were in prison ourselves.  If I were in prison for my faith, I'd be praying for me and hoping everybody else on the planet was doing the same!!  God answers prayer in ways that are best from His perspective. His job is to answer; ours is to faithfully pray. In a country where churches are underground and few in number, who will pray for the prisoners if we here in the West  don't?

But beyond that, over the years, I have learned so much about faith and about God by following the stories of my brothers and sisters who are willing to take a stand and even give their lives if necessary for the gospel.  At every opportunity I try to read what they've written or listen to their testimonies. Why?  Because they have so much to teach the rest of the body of Christ.  Because, to me, they are the true heroes of the faith.  Because, although I am not as strong as they are, each testimony encourages me to go  a little deeper in my walk with Jesus.
Basically, if you don't get to know these people through the web, through books, through testimonies, you are missing out on the opportunity to "know" some of the sweetest Christians on earth.
Truly wherever they go, they prove the truth of II Cor. 2:14-17.   This doesn't mean that they are perfect, that they don't experience fear, discouragement, and even feelings of abandonment at times. But it does mean that when their ordeal is over, ending either in release to this world or in  release to a better world, they leave behind the sweet fragrance of Christ.
If you want to be blessed, get to "know" some of the heroes of the faith who, even now, are carrying the torch for Christ as well as for the rest of us, their family in Christ.
And pray for them. Even just once a week.
After all, they pray for us.
And turnabout is fair play, don't you think? 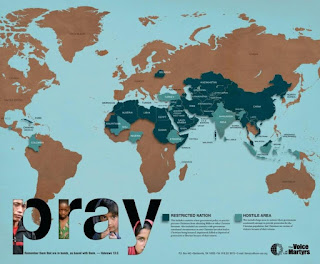