Sometimes I just need to hear it again.
See it again.
Believe it again.
I can read "gross" war stories but  I can't watch gross or scary things at all. (Finding Nemo nearly put me in traction..   The early demise of his in-vitro siblings literally scared the heck out of me, putting me on guard right from the get-go.  By the time the entire film was over, my neck and shoulders were so stiff it hurt to move and I had a killer headache.  As I said,  I can read about bad stuff - to a degree - but I can't  watch it - not kidding...:)
When I was pregnant - now over 22 years ago- I bought a hard back copy of a newly released book, Evidence Not Seen by Darlene Diebler Rose.  I started it  but  didn't get very far before I was thoroughly grossed out and had to put it aside.  I had wasted our money.
Then one evening when I was about 6 months along and having trouble with swollen ankles, I was looking for something to keep my mind occupied while I kept my feet propped up. Phil wouldn't be home until late so I was on my own.  Not being a t.v. person, I decided to try Darlene Rose's book again and this time I could not put it down.
When Phil came home about 9 p.m. from his Bible study, I'm sure he expected to hear a litany of my complaints  while he ran back and forth between the kitchen bringing me crushed ice and just generally waiting on me hand and foot.  (I'm telling you, that boy suffered during the last months of my pregnancy for sure!!)
However, this time when he got home, he received a rapid-fire verbal  book review  of the first half of Evidence Not Seen.  The next night he got the rest of the story and it impacted both of us greatly.  I loaned my hardback copy to a friend, who was also a book lover. My friend, Penny, had cancer and normally she returned every book I loaned her but this time the book didn't come back. Every time I saw her, I thought about asking for it but decided not to.  And then she moved to another area.
The book is still in print 22 years later, which tells me it is a Christian classic.  I've always had a copy of it on my bookshelves - just in paperback - and have read it at  least a couple of times. Then when David was elementary age, someone told me Focus on the Family had an audio copy of Mrs. Rose sharing her testimony.  At that time it was on cassette and I ordered one so that we could listen to it while traveling on vacation. Again, I think her story impacted all of us.
Some of her stories I was even able to share with my kids in my history class  when we got to WWII.  The "banana" story was always a favorite as well as the final aerial dogfight between the Axis and Allied powers over Darlene's prison camp in the Dutch East Indies, a place that had been her home for approximately 4 years.
Although her book is always on my bookshelf, it had literally been years since I had re-read the story. Maybe I reached a place where I thought I had read and heard it so many times that I never needed to hear it again. If so, I was wrong.
About a week or so ago, I decided to see if I could get a hardback copy of her story just... because...  Because I love books... Because the paperback copies I've had don't last... Because some books just beg to be kept in hardback...  (Only book fanatics will understand that last "because" I am sure.  And, yes, my life is out of whack on the issue of books!  :)
Normally I go for "excellent condition" and "cheap" when ordering out of print stuff from Amazon. This time I saw a copy that was "like new" and also autographed. It wasn't cheap so I debated but finally splurged and spent 27.00 (plus shipping)   to get it, intending to put it on my shelf.  Which is kinda crazy, I know. However, I would definitely be giving   my current paperback copy to someone  and that sort  of salved my conscience and, besides,  who knew???   Someday I was bound to re-read it. Or maybe a grandkid on down the line would...
"Someday" came sooner than I thought - about 2 days after the book arrived in the mail I picked it up and decided to review at least parts of it.   I found myself re-reading the first few chapters slowly, taking in details I had forgotten, savoring her wisdom  and her humble faith and once again, knew I was "hooked".  I would be reading the whole thing.
And then I wanted to hear her story again from her own mouth so I went to Focus on the Family and ordered her talk, this time it was on two  CD's.  I started listening to the first CD in the car as I was running errands and once again, I was caught up in her verbal account of the difficult years of her life.  I listened to some more of the story last night on the way to a meeting and again on the way home. And then I started the second CD this morning on my way to Cracker Barrel, where I had breakfast while reading another chapter in her book!!!

You probably won't be surprised to learn that I started playing the CD as soon as I got in the car to drive home. Only the drive home was shorter than the testimony on the CD so I found myself aimlessly just driving, just listening, and just praying, sometimes crying, sometimes laughing!
A few of the things that Darlene said impacted me so greatly that I  kept rewinding and listening again to certain statements, trying to  make sure that  I not only heard but also remembered what the Lord taught her during those 4 long and extremely tough years of warfare, imprisonment, physical deprivation, illness, torture, and the loss of her husband.
What good could possibly come out of all that?
What sweetness and light could come from such hatred and darkness?
A lot.
At a time when the world seemed on the brink of destroying itself, when the "bad guys" seemed to be in control and suffering was everywhere she looked, God revealed Himself to Darlene in the sweetest of ways. At one point in her testimony, she said that although she suffered terribly for some months while in an especially cruel prison, that alone in her cell she would begin to sing and pray and His presence would so fill that little cell that when she opened her eyes, she fully expected to be in Glory and would be surprised to see the four dirty walls of her cell.  She plainly said He was there with her and, after hearing/reading her story, I don't doubt it for a minute.
One thing in particular that meant a lot to me was her discussion of how another beloved missionary, Miss Philoma Seeley, was treated so brutally by the Japanese that she literally lost her mind.  Darlene doesn't go into detail about what happened to Philoma.  But she does say that when Philoma  was returned to the main POW camp, along with Darlene,  that Philoma had to be locked away in a small hut by herself for her own safety and there she spent day after day, raving like a lunatic and throwing off her clothes - something she would never have done in her right mind. This older woman was a seasoned Christ-follower who had been helped before in miraculous ways by the God she loved. And here she was, ill and temporarily insane because of the cruel treatment of her captors.
Darlene would take her food and one day after she had given Philoma some food, she sat down outside that hut and  started sobbing, asking God, "Why?"   At that point, she felt a hand on her shoulder. It was the leader of her main prison camp, a Mr. Yamaji, who had been vicious himself at one time, back before Darlene witnessed to him about the deep love that God had for him.  So there was this man who  at one time had actually beaten a prisoner to death, standing beside her, his hand on her shoulder, saying gently, "Don't cry.  Miss Seeley does not know what is happening.  Please, remember what you told me about God."
In God's providence, this once vicious officer was sharing the love of God with her, offering her, a prisoner, comfort.
Darlene went on to say in her testimony that she asked God to heal Philoma's mind and He didn't do that until much later. At the time, she wondered why He didn't answer her prayer but when she asked Him, He just impressed upon her heart that He would restore the time  that the canker worm had eaten - the months that suffering had taken from Philoma.
After the war, Philoma was able to go back on the mission field and had the greatest days of her lengthy career.  And Darlene learned that Philoma had been so physically sick in the POW camp with so many diseases that God had to literally heal her body first before restoring her mind - the temporary mental illness had actually  protected her from understanding the things she was experiencing physically there in the camp due to disease.
Often, we just can't see why God allows what He allows; we can't understand why this prayer goes unanswered or that situation doesn't improve.
If nothing else, Darlene's story is graphic reminder that He is in control and he has purposes that we just can't understand until later, sometimes much later - often times not until we get to Heaven.
Even if you don't do "gross", I would encourage you to get the book and also the CD.  The book will make you laugh and cry, sometimes at the same time, and it will encourage you to go on in faith. The CD is also powerful in it's own way and, while not always as clear as the book, adds details and insight that the book doesn't have. Together, you get the whole picture and what a picture it is!! 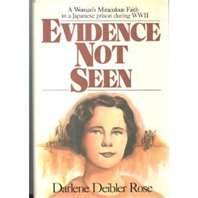