Doughnuts... they aren't my favorite food which might surprise you if you've ever looked at my waistline...
They're okay but they aren't why I go by  a local shop once in a while.
I go by the shop because years ago I knew someone who worked there part time.  A young Muslim man, an international, who kept asking me questions about Christianity.  His curiosity bothered me.  I kept wondering what was behind his questions and what his family would think if they knew he was asking me all these things.  I wondered at times if even just answering his questions was treading on thin ice and so sometimes I gave noncommittal answers.  I had heard that the consequences of leaving Islam can be serious, even causing one to be rejected totally by his family. So I was wary when he asked things about my faith; it was new ground for me and I wasn't sure what to say, what not to say, where my responsibility started and where it ended...
And then one day he told me about the doughnut shop and I understood why he was curious.
When he first came here, he  spoke very little English.  But he had friends, also Muslims from another country,  who ran the doughnut shop and so he could pick up extra income  working there in the early mornings  before going on to his main job.  Over time he noticed that the people who bought doughnuts Monday through Saturday seemed impatient and sometimes even rude.  He didn't particularly like them.
But Sunday mornings were different. The people smiled and thanked him, they were nice.
So he asked his boss one day why there was such a difference.
His boss said, "Those customers are Christians. They are going to church and they are just nicer."
And that's why I had been receiving periodic questions about my faith:  my friend simply wanted to know what it was about Christianity that made people different.
He didn't want to convert; he just wanted to understand.
And so now, whenever I am near the shop in the morning, I go by and get a few doughnuts.  And I make it a point to smile and be polite on a workday.  (Because I'm sure that some of the people who were grumpy and rude Monday through Friday were also Christians. And that would be me on occasion as well.  I'm guilty too!)
So this is the deal:  I don't know the people who work in this shop - my friend has long since quite working there I'm sure -  and the current workers don't know me. We never discuss anything and I have no expectations that we ever will.  That's not why I go  there.
I make the detour occasionally because, oddly enough, I feel  I owe that place a debt of gratitude. Because one of their workers, a long time ago now,  really brought it home to me how much a smile (or lack thereof) can impact others.
Something to think about...  Especially if you call yourself a Christian...
Just sayin' 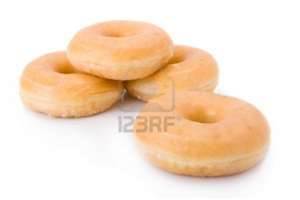