I used to think that Angelina Jolie was crazy.  That was back when I first read that she and Billy Bob Thornton had vials of blood drawn, exchanged the vials as gifts to each other, and then wore them around their necks as a sign of enduring love.
Actually, I still think that is crazy.  I mean, how long does a sample of blood last like that before it dries up?  Unless it's vacuum packed, I'm guessing it would eventually go away, maybe enduring a little longer than the love that it symbolized but still....
And seriously, I don't think it would look good.
And what about people who faint at the sight of blood?
Or what about those who are simply curious?
Guest:  Angelina!  Hey, what is that cylinder thing hanging from your neck all about?
Angelina:  This?  Oh, it's just my husband's blood...
The whole thing sounds sort of eewwwww:      blood-letting as a sign of a never-ending love that... obviously.. ended.  I'm glad Phil just wanted wedding rings... seriously.
On the other hand, I could definitely understand a spouse donating blood to help their loved one through major surgery - that's practical.  Or a parent donating a kidney to save their child's life - that's a no-brainer.
The difference being, obviously, that the vial-around-the-neck-thing was a symbol and not a good one since the Jolie/Thornton marriage dissolved within a few years of their blood-letting while donating blood actually  serves a valuable purpose.
I guess I'm saying the Jolie thing, in my opinion, was more attention-getting than anything.
The doner thing, on the other hand, is meaningful.
Soooo... what if someone does both?  Donates, literally, their life blood to save another and in doing so, proves that they have an enduring love for that person that will go with them to the grave?
Or even beyond the grave?

A vial of blood around the neck? No way!
But now maybe a ragged piece of torn bread lying on a pristine white cloth, except for the red wine stain in one corner..  As the sole decoration on the kitchen table where it can be seen each morning ... as a reminder...
Of how the one and only Son of God, full of grace and glory and truth,  gave His life blood to save mine and then, as if that were not enough,  provided out of sheer, undying love a permanent seat at His banquet table?
Just sayin' 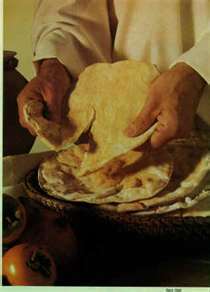