Upside down?  Inside out?
I've wanted a new set of dishes for some time now. My old ones were getting chipped, etc.  I found a new set of dishes a couple of weeks ago that were cheap and attractive so I bought a 4-place setting.  Instead of feeling happy, I felt a bit anxious as I paid for them,  transported them home, and then washed them before putting them away.  Should I have gotten another four-place setting just in case we break some of these?  Were the bowls really practical?  Would the guys like them?  Had I wasted our money?
Bottom line: I liked them. But they didn't bring me the happiness that I expected. Instead, they actually brought me a new set of worries.
Yesterday I was in a rip-and-tear to get things crossed off my to-do list.  I ran into the grocery store to get some cans of corn, some celery and that was about it. I had purchased groceries the day before so this would be a quick stop, grab-a-few-items-and-go shopping trip. (I actually do some of those - not many, but some...:)
As I was pushing my cart down the aisle, I saw some industry-sized cans of corn, green beans, ravioli etc and was shocked at how cheap they were.  I thought about last Sunday, the food bank boxes, and also about  serving a hot meal to the people there.  After having an internal debate for a couple of minutes, I decided to grab some of the large cans of corn and ravioli  for the Sunday food bank meals.
But that was all!!!  I was in a hurry, had places to go and things to do. I didn't have time to do a lot of shopping and I definitely wasn't made out of money. On top of that, I hardly even wanted to think about what I had spent on groceries the day before.
However, as I walked down the aisles, I remembered asking a worker last Sunday afternoon: what kinds of food do you need for the boxes?  The lady had replied, "Mostly things that children can fix and would like to eat."  I had replied, "You mean like macaroni and cheese, peanut butter?"  She said yes and added that bags of staples such as rice and flour were also needed and that they had refrigerators where they could keep perishable items as well, such as hot dogs.
And there I was, staring down  a big box of macaroni and cheese which contained 10  regular size boxes, also at a good price.  Hmmmm.... all week long I had intended to get some macaroni and cheese for the food bank... only I had been too busy...
I figure anyone who is reading this is tracking with me now and even way ahead of me:) At any rate,   I finally just sort of mentally threw my hands up in the air and told myself, "Okay.  Everything will get done eventually on that all-important list!  Somehow, it always does!  Right now, I'm just going to shop for the food bank."  And I did.
As I walked down the aisles looking at the items unhurriedly and with a totally  new purpose in mind, I began to feel peaceful.  Happy.  Content. Joyful.
Seriously.
This is so foreign to me (I am sorry to say) and especially in grocery stores on busy days, that I knew it had to be God.  So there I was -  a slightly geriatric, super-sized mom with nothing to give me any claim to fame, tossing  a few regular size jars of peanut butter into the basket here and adding some bags of rice and dry beans there and at the same time basking in the presence of the Savior of the world.
Seriously. Right there in the peanut butter aisle.
Okay.  This just doesn't happen to me.  Not even in the macaroni and cheese aisle.  Not even always in church.
Definitely a wow moment for me.
By the time I reached the check-out counter, His presence was still with me in an almost tangible way and   I was still happily, wonderingly pondering this as   I unloaded  the food bank stuff .  Then, as I was about to reach for my own personal items, I impulsively stopped, mostly out of curiosity, and  asked the checker to ring up the items already on the conveyor belt separately from the rest of the stuff in my basket.   And right after that,  before I even thought about what I was saying, I blurted out... "Because someone is going to pay me back for those items."
Someone is going to pay me back???? Where did that come from????
Yet that was what ran through my mind and like gum in a gumball machine, immediately rolled right out my mouth.
Someone is going to pay me back???
Who???
Next thought, which I managed, just barely, not to happily blurt out was, "Jesus is going to pay me back..."
I didn't blurt this out because I knew it would sound crazy.
Yet at the same time, I knew beyond a shadow of a doubt that  it was true.
Jesus  was going to pick up the tab. It was that simple. And that profound.
Whether He  repays me here or There, whether He uses the common, tarnished  "coin" of this realm or whether He repays me in celestial coin...  it doesn't really matter.
All that mattered to me at that moment was the stunning assurance that He's got this.
Wow.
And even more wow,  this morning, first thing, the joy and the sense of His nearness was again  right there.
New dishes?  Large cans of industry sized corn and ravioli?
All I can say is: I like my dishes. But I love those large, ugly cans of corn and ravioli!!!
Seriously! 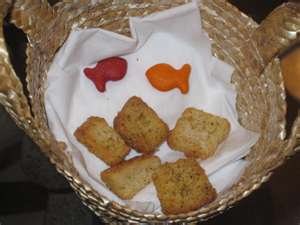