There are a lot of things I don't understand.
Today I went to fill out an application so that I can teach a GED class one night a week. A friend asked me to pick up the class she has been teaching temporarily until she can get back to it. The class will be held in a nearby church and I'm as interested in the faith-based possibilities outside the class as anything else since  the church where the class meets seems to have a vibrant outreach to the poor and the at-risk kids in our area.  The class would be held  near my home and doesn't require lesson plans or giving lectures, running off handouts, etc.  Basically, it's not submerging myself back into the tension-warped world of public school teaching and it shouldn't impinge on my current life style, which I love, the way a full-blown teaching job would or even assigned subbing would.
So I thought, "This is no big deal.  Right?"
And I went in to fill out an application this morning thinking, "I'll get this done in 10 or 15 minutes or so and have time to go hit the pool before it gets too hot.  Right?"
Forty minutes later and at least 20 forms later (not kidding), I was pretty much done when the person in charge of the program casually mentioned that I would have to get 30 hours of in-service, which would be provided free of charge.  My heart stopped.
Thirty hours of in-service????
Are you kidding me????
I looked at the head person and said, "I'm just doing this through December. One night a week."
She replied, "Oh. Then you don't need in-service." 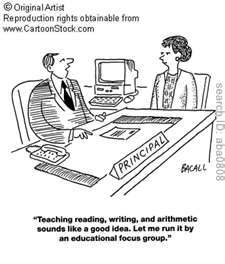 That's good. Because if the answer had been otherwise, I would have withdrawn my application right then and there. Without hesitation.
Thirty hours of in-service, to me, is synonymous with something from the nether regions of the earth. Over my thirty years of teaching, I attended some in-services that were entertaining and some that were even useful.  But the vast majority did not fall into either category. Most of them were, in my opinion (and I am sure others would not share my opinion!) simply hours whiled away at the tax-payer's expense, generating jobs for other employees who were up on the latest education-ese which then generated record-keeping jobs that kept other employees gainfully employed keeping up with the aforesaid  myriad state employees who were either sweet-talked (bribed) into lecturing or, on the other side of the coin, coerced into so many hours of sitting and listening to said high-paid educational lecturers who often spouted philosophies and techniques that did not transfer well to an actual, real-live classroom full of hormonally challenged teen-agers and one beleaguered middle aged teacher...Ha!

Okay. If you understood that last sentence, then maybe you could have helped decipher the 20 forms or so that I filled out before we got around to juggling the water-balloon issue of "You have to take 30 hours of in-service."  I don't even know what all forms I filled out in order to monitor a GED class one night a week for approximately 6 months. I know I filled out two tax forms and didn't fully understand either one and actually got fed up with, "If you have such and such then check here... Then add lines 2-6 excluding 4 and fill out the next side of the form but only if line 8 applies and you checked box 9..."  Something like that.  I literally got tired of deciphering it after checking "no" to at least 15 statements on another page stating that I did not have any relatives of any relatives who were even remotely related to any relatives who had anything to do with any state job from the legislative body on down to the local dog catcher...
I came out actually feeling apprehensive, feeling like I had signed my life away and given who knows what permission to who knows whom in the government to do who knows what to me simply because I agreed to temporarily monitor a night class once a week. Until Christmas. Ho-ho-ho...
And now the governments that brought the world time-consuming, tax-gobbling educational in-service hours and ubiquitous tax forms that dog us from the cradle to the grave - this same government is going to run my health care?
Are you kidding me????
Posted by Unknown at 6:14 PM