Neither for us or for our adversaries...


Most of my blogs are lacking in controversy and most of my life is the same. Frankly, I like it that way. But every once in a while, I feel like I have to say something no matter how unpopular it may be.
First, please understand: I love my country. I taught history for 31 years and while I know our country isn't perfect, I value our heritage, enjoy our freedoms and am blessed by our prosperity.  Even as I acknowledged the things that we have done wrong over the centuries, I always felt pride when teaching about  the many things that we've done well.  Honestly, there is no place else where I would want to live.
Having said that, I must say this.
In Joshua 5:13-15, the Israelite leader came upon a man who was standing opposite to him, with a drawn sword.  A stranger posed to block his way.  Joshua met this challenge with a challenge of his own:  "Are you for us or for our adversaries?" he demanded.
The answer to that question left him flat out, face down on the ground.
The imposing stranger didn't take sides. Instead, he let Joshua know that his was the only "side" that mattered, the only real game in town.
He replied, "No, rather I indeed come now as captain of the host of the Lord."
Today, instead of worrying about our country's future (which I admit that I do), I wonder if our proper response would be to fall to the ground and declare our allegiance to God's  "side", whatever that might be.
As these unwelcome thoughts intruded on my mind, I realized I was passing a house that is sort of the bane of our existence. Not the building itself, of course. But the people inside. Two young men who love expensive "toys". A race car that used to roar down our street, neck and neck with others, at high speed. Until theirs crashed.  Now, two very expensive motorcycles that I know must have awakened the dead at 3 in the morning on occasion, they are that loud!
We know from sporadic chats with these guys that God is nowhere on their radar screen.    Work, money, women and thrills seem to fill the deepest desires of their hearts.
So how to pray for them?   The usual prayers of Bless them and Draw them to Yourself don't seem to have been working. In frustration, I asked God to show me what to pray and immediately, I had a picture of these somewhat wild, reckless guys as being insulated from God, wrapped in a false security blanket as it were and unable to feel their need for the  One who loves them, who created them and who wants to never leave them.  So I asked that God would remove anything that is insulating them from finding the only true security that there is.
And I realized that affluence can be (isn't always but can be) a form of spiritual insulation or, maybe a better word would be, encapsulation.  And I wondered about our nation as a whole, one of the richest nations on the earth.
And how we use our wealth.
And how our wealth affects our walk with God.

Then I remembered hearing someone say that the Western world and America in particular, plays a huge part in the sex trade.  That many children, born in third world countries to prostitutes or just into dire poverty, are never even "on the grid" and that these children, because they legally don't even exist, are often sold as toddlers  into the sex trade and that here in places like Las Vegas, there are men who wait in hotel rooms right now as you read this, having paid large sums of money - men  waiting  for their young boys to arrive. (By the way, Las Vegas is one of the 14 child sex trade capitals in the world and it's unfortunately not the only city in America that deals in that type of  trafficking, by any means.)
And I found myself praying, somewhat to  my dismay,  "Lord, if it would help to destroy the sex trafficking industry, please let our country "fall", meaning: remove our sense of invincibility, of our feeling  that we will always, regardless of how we may struggle from time to time, ultimately  have pretty much everything we need as a nation and more - without obedience to You.   Let the things that need to be shaken, be shaken, so that what remains is rock solid - so that what remains  is You.  (Hebrews 12:27-29)
And the prayers that I didn't  want to pray kept coming.
"Lord, if it would bring more people to feel their need of You, please let our country "fall".
"Lord, if it would help to stop the drug trafficking from Latin America, please let our country "fall".
"Lord, if it would help destroy the porn industry, please let our country "fall".
Honestly, I hope we as a nation won't ever have to "go there".  Don't get me wrong, I want these evil systems to be, at the very least, severely weakened and ultimately totally destroyed. They ruin lives every single day - both the lives of the victims and oppressors - because sin simply kills everything it infiltrates like a deadly type of poison.   However, as an American, I don't want to see our country - my country - "fall", ever.  Yet, still, I found myself praying  "If it would ... then please let..." as I finished my walk home last night.  In other words, I want America to repent just as I want the guys with the motorcycles to repent from their unbelief and find blessing.  But if it's not going to happen that way and it can happen another way, then, please, for their good, for our good, let it happen.

Is it even right to pray that way?  I don't know.
However, I did remember something I read a long time ago - in a biography of Watchman Nee, a great Chinese evangelist.
I read  that during WWII, a group of dedicated Chinese Christians prayed, not that  their country would be spared but that God would do whatever it took to bring the Chinese to Himself  even if that included defeat. God allowed them to experience years of  defeat as the Japanese "ran over" most of China, occupied it,  and caused unspeakable suffering to many natives. Then, after the war, more bad news!  The Chinese communists took over and brutally tried to eradicate Christianity from off their map. They were so effective that when I did post graduate work at Fayetteville in 1984, our professor, who was an expert on China and Russia, told us that there were  underground churches in the Soviet Union but absolutely none in China - that viable  Christianity had been, for all practical purposes, obliterated in the People's Democratic Republic of China.
I believed the statistics as he did. But we were both wrong.  Somehow, through this double whammy of WWII and the communist takeover, the Chinese church emerged millions strong decades later, purified by fire and ready to do whatever it takes to get the gospel to closed countries. (Their own country, ironically, is hardly "open"). They have even started a movement to take the Gospel all the way from China, across the dangerous  10-40 "window", until they reach Jerusalem. They know that most of the countries between China and Israel are very hostile to Christianity. But they've been tortured and beaten in their own prisons back home so they don't fear being beaten, tortured or even killed in foreign countries. They simply want to take the Gospel where ever it is needed.
Tonight I have an image of a man, a warrior, standing strong, mute, and with drawn sword, facing the country I love.
And I think it's time for us to get on our face and declare ourselves to be on His side, regardless of where the chips may fall. Hopefully, He will lead us  as a people to repentance and further blessing.  (II Chronicles 7:14)  But if God's will can only come through adversity, then, still, I am on the Lord's side. It is, in fact, the only right place and ultimately the only safe place to be. 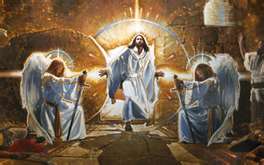