Taking the Turns Right Alongside Him... 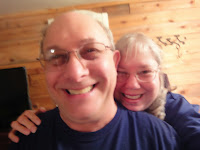 Twenty-seven years ago when we fell in love and decided to get married, we both entered into a major lifestyle change.  However, as I look back over the years, I think he's had more adjustments to make than I.  For example, he likes to joke that when a man marries, all the woman's things eventually find a home around the house while all the man's possessions end up in storage...  Ha!
Phil's favorite color is brown while mine is yellow....  Right now our kitchen and our bathroom are painted a bright, cheery yellow :)   Phil's not fond of plants all over the house and right now we have Amaryllises blooming on our breakfast bar - five of them to be exact.  (I used to keep them on the kitchen counter and when Phil would enter the kitchen, he would imitate jungle bird calls - and very well, I might add.)  When we started dating, I had a dog and  he had a cat. His whole family are cat lovers.   Right now we have 4 dogs and no cat.
However, by far and away the biggest adjustment he's ever had to make was when we allowed friends to live with us for a short time.  International students.  The middle school kid next door.  These periods in our married life took Phil so far out of his comfort zone that he basically ended up in the stratosphere before all was said and done!  Wow! What stress he went through as we prepared to move someone into our home!  Why would he even do that?
Because he loves me.
Because he loves God.
Because he made a lifetime commitment when he threw his lot in with me on Nov. 22, 1986.
When he made that commitment, he knew I was a lot more social than he was and he knew he was signing on for some adjustments. However, in retrospect I think he can honestly say that he had no idea of what it would cost to live with me. Seriously!
Yet he's never wavered in his commitment to me but  instead  has, as we like to jokingly say, taken all the turns right along with me... (Quote from Driving Miss Daisy)  And there have been a lot of them - trust me on this!
And this is where I'm going with all this.
Luke 9:23 personalized:
"And Jesus is saying to me:  If you, Cathy, wish to come after Me, you will have to deny yourself and carry your cross daily and follow Me..."
And the key words that struck me today were, "If you, Cathy, wish to come after Me..."
Do I wish to cast my lot in with Jesus the way Phil cast his lot in with me so many years ago?
Am I willing to give up some things, not even necessarily bad things - just things that won't fit with loving and living with Jesus (John 15:5) - am I willing to adjust to His lifestyle in order to be with Him?  And since He carried a cross, am I willing to join with Him in that as well?

As I write this an image comes to mind from the book, Seal of  God.  In it the author, Chad Williams, describes the training he had to endure in order to become a navy seal.  One of the worst exercises that he had to live through was to run back and forth across a wet sandy beach with several other men... while they carried a boat over their heads.  Literally.  For hours. Often In the dead of night. It was brutal and sometimes when the team had been at it for a while and  was beyond exhaustion, one member would try to slack off by acting like he was holding the boat when in reality, he wasn't - his arms would be lifted up but he would no longer be pressing hard against the hull in order to support it, counting on cover of darkness to hide his little respite. At that point, he wasn't a team player; he had lost sight of the goal.  He was no longer carrying his cross and his companions suffered because of it.
Jesus enjoyed life. He attended weddings and I have no doubt He would be at someone's Thanksgiving feast today.   But He also had a mission which involved carrying a cross.
If I take the same road that He is taking, if I cast my lot in with Him, if I am so in love with Him that I want to be with Him day by day no matter what I have to do in order to achieve that - then there will be some lifestyle adjustments and there will be some cross-carrying.  There will be times when I have to say no to myself in order to fit in with His plans.  There will be times when I feel pushed to the point of exhaustion as I run in tandem with Him, trying to carry the cross He has for me to carry.
But, oh, the joy of being with the One I love!
For me on this  beautiful Thanksgiving morning, it all boils down to one phrase:
"Cathy, if you wish to come after Me..."
Do I wish to follow after Him?
You know, Lord! 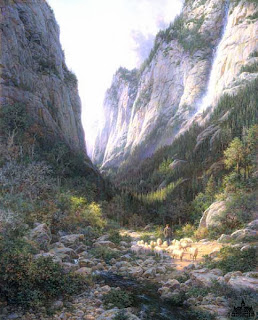 This Thanksgiving, if you haven't done so already - would you consider an outstanding invitation to routinely sit at the table with Jesus?
Revelation 3:20  "Behold, I stand at the door and knock; if anyone hears My voice and opens the door, I will come into him , and will dine with him, and he with Me." 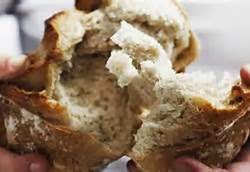