This week I "got it"... sort of.
Not sure if I can hold onto it - at my age holding onto things is harder than you might think :)
Really, about all I can say is that for the first time in a long time, I lay awake until the wee hours of the morning, unable to sleep not because of stress but because of the wonder of God.
I lay there pondering a rather remarkable answer to prayer and thinking, "This is not what God does. This is who God is."
Yes, clearly God orchestrated things in order to answer a heartfelt prayer, many heartfelt prayers.  And He did it in a most unexpected way.  Yes, He did that.
And really, normally, I stop at the "did that" part as in, "Wow!  Look at how God answered my prayer!"  In other words, I'm really, really thankful, maybe even awed by what I (or someone else) received.  But that is where my thought process stops. A kind of: Look-At-That-Blessing type of deal.
Then there are other times when I sort of tip my hat to God on a deeper level (is there an oxymoron in there somewhere?) and say, "Wow!  Look at how God answered my prayer!" moving a little further along the learning curve of divine-love-responds-to-helpless-man.
But the other night, as I contemplated some impossible juxtapositions of divine grace and human need, I suddenly leaped past point A and point B and arrived at point C.  "Wow!  This is Who God is!"
I just kept thinking about the impossible juxtaposition of man-cries-out-and-impossible-things-happen-in-inexplicable-ways followed by the wide-eyed (mental) exclamation: That's God! That's Who He is!
It's not so much about what He does as it is about Who He is.
So who is He?
He's the One who can transport a Jew named Phillip to meet up with an Ethiopian official who just happens to be reading a passage out of Isaiah that he doesn't understand.  What a coincidence!  Just when this international has a question about Scripture, here comes a Jewish man, a total stranger, who can explain that very  passage. And willingly does so.  And then baptizes him. (Acts 8)
He's also  the one who can instruct a pagan God-seeker named Cornelius to send his servants to seek out an inferior (rough, crude) member of a subjugated race in order to find out who God is.
Um, run that by me again?  Is that like a Japanese WWII military commander humbly seeking out a Chinese peasant in order to learn about the one true God?
Yeah.  Pretty much.
But there's more.
Because while the Roman hot shot is getting ready to contact a lowly fisherman named Peter, that same fisherman is being shocked out of his sandals by a divine directive telling him to reverse all his previous thinking and training about what is clean and unclean, spiritually acceptable and spiritually contaminated. As in, Heads up, Peter!  A despised Roman pagan is about to land on your doorstep (figuratively speaking) and you, Peter, are not only going to associate with him, you are going to welcome him, eat with him, teach him, and lead him to Me.  He's going to become your brother... (Acts 10 - loose interpretation... very loose...)
And if that last seems a bit complicated to you, it's because... well,  it is. Seriously. That's not a kid's story.
Two unlikely men whom God brings together; men who  have more barriers between them than say... Jewish Jonah and the bloodthirsty Ninevites?  Or Syrian Naman and his lowly Jewish servant girl? Or maybe Nebuchadnezzar and a captive no-body Jew named, um, Daniel?  Or perhaps a Philippian jailer and a couple of inmates named Paul and Silas?
And I'm not even talking (yet) about taking a measly bit of bread and a paltry packet of  fish and feeding thousands of people with it.  Right now I'm just talking about how God brings the most unlikely of people together in the most precise timing imaginable in order to meet needs, yes, but also to say, "Woo who!  Did you catch that??  What I just did - um, do you know anybody else who can do that?  No?  Well, that's who I am. And, incidentally, I happen to  love you."
Wow.
This week I got that.
Next week I hope I continue to do the same. 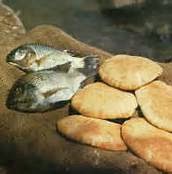