He Makes All Things New

Regrets are hard to carry and so are some memories.
My father died of pneumonia in Sept. 1995.  My mother died of pancreatic cancer in Dec. 1995.
My father's death was relatively quick and we were not close. I hadn't seen him since I was 18 or so as he had lived out of state, away from us for the majority of my adulthood. Still, when his health took a final turn for the worse, I remember him asking me (in writing because he couldn't speak) when the surgery would be?  I realized that he expected the doctors to save him one more time and I had to tell him there wouldn't be any surgery, that he was too weak to survive an operation.  That was hard. He wasn't ready for death and yet, it was coming and there was nothing I could do to stop it.
But it was my mother's death that rocked me to the core.  For many months after she went home, I was haunted by the things I had seen during the six months that she was on Hospice.  As anyone knows who has dealt with cancer, after the disease has come, done its worst, and gone, there's not much left of the person who played unwilling host to the illness. I just had so many heartbreaking memories from those six months that I often longed for the days when I was a child and was not allowed to go above the lobby floor of the hospital. I would tell people that it was as  if a curtain had been pulled back on something I never wanted to see and, in fact, wanted desperately to forget.  To say she lost all dignity and suffered acutely would be putting it mildly.  In many ways, she was my best friend and that wound has not completely healed even yet.
When my sister died in Oct. 2008, the regrets were even worse. Overwhelmingly so.  No images though, because my sister and I had been estranged for many years when she died. Yet the last time I had seen her, in 2006 when she was admitted to the hospital for lung cancer, I could see that decades of mental illness (paranoia schizophrenia)  had  taken a huge toll on her; so much so that she scarcely resembled the sister I once knew. Just as cancer had ravaged my mother, so mental illness had ravaged my sister. Only where the cancer took months to do its work, the mental illness took decades and throughout those 40 years, the mental illness exacted a very high toll on everyone who knew her and loved her. When the toll became too excruciating, I opted out and never really opted back in.  My regrets are legion. Hindsight truly is always 20/20.  Sometimes I have to remind myself that hindsight is also viewed only through rose-colored glasses.   Still, I find myself looking in the "rear view mirror" of my life from time to time.
Over the years, I've developed a habit of trying to justify my existence - not to others but to myself.  Rehearsing the things I did right -to prove I'm not so bad.  Rehashing things others have done wrong - to prove they "started it" or to prove that I do know right from wrong even though I don't always act on my knowledge.
While we were in Memphis earlier this week, I got on my knees and asked God to deliver me from this recurrent need to justify myself, in both large and small matters - all having to do with the past.
The first thing He showed me, through an internet Bible study that I'm doing is that I have a choice. I can justify myself or I can love God with all my heart, soul, mind, and strength. I can't do both.  God or self?  Who am I going to defend, exalt, and meditate on?  Which is more important - what I've done or what He has and is doing?
The second thing He showed me came through a book I bought yesterday, Appointments with Heaven by Dr. Reggie Anderson.  It was an iffy purchase.  A book that I thought might be "on the money" or might be spurious.  I can't tell you whether it's legit or not. I'm only half way through and up to this point, I am convinced he's being straight with the reader. But it's a subjective thing and each reader would have to make up his or her own mind. 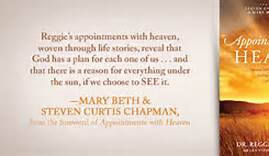 All I can say is that when I got to the pivotal point in the story, I knew God was dealing with me.  To say I was surprised is an understatement.
Dr. Anderson, the author, grew up in a Christian home and then left both - his home and his faith. He had good reason for wanting to move out of state as well as  for wanting to turn his back on the innocent, untested faith of his youth.

The fact is that when his faith was tested, it was huge and his faith faltered, died, under the onus of that trial.  Basically life was good - so God was good - until Reggie Anderson turned 18 or so and learned that his best friends and cousins, two Godly young men, had been killed, murdered. Along with three other men in the family - all five guys had been shot execution style by some escaped convicts who were looking for some gas for their escape vehicle and a little fun along the way. The fun they found with the young pregnant wife of one of the men they killed.  She also died but probably not quickly enough.
Six deaths in one day.
And God didn't prevent it.
Six people who loved Him and served Him.
And God wasn't there.
That was how Reggie saw it.
So he left faith in God and put his faith in education, a good career, hanging out with his drinking buddies, and being an intellectual atheist.  As he put it, when he was 8 he realized there was no Santa Clause. And by the time he'd reached 20, he knew there was no God.  End of story.
Essentially, the horror of those deaths, the memory of what happened to his loved ones, the first-hand knowledge of evil that was suddenly forced on him - all of this drove him to live and serve something he could see and understand. That something was education and, in particular, science.  During his undergraduate years, he felt he had the answers that he needed as well as the keys to success. He was on top of the world with a great future. 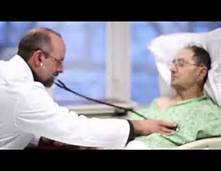 Then he hit medical school, where he was inundated with information which changed often times before he had even fully grasped the old, now outdated, information. New studies, current studies, past studies - it all humbled him and convinced him that he couldn't learn everything that was out there to grasp. That no one could.
And then he had to work on a cadaver and the intricacy of the human body, particularly the complex nature of the eye, convinced him that the body was a work of art and that where you have a complicated piece of art, there must be an artist. Somewhere.
So he moved from atheist to agnostic.
He began to search.
And that search culminated in a weekend camping trip where he ended up alone with just the stars, a flashlight, and two books:  Mere Christianity by C. S. Lewis and a copy of The Bible. He read the C. S. Lewis book in one sitting and then turned to the Bible where he read the gospel of John from start to finish.  Finally he fell into a deep sleep, unlike any other he had ever experienced, and had a dream in which he saw his murdered friends.  The dream ended with a challenge from Jesus and when he awoke, he was most definitely a believer.
What stood out for me in this account was the fact that his friends were not the way he remembered them.  They just weren't.  No bullet holes. Not even any childhood scars. They were whole; they were healthy - glowing with vitality in fact -  and and they were happy, joyous even.
When someone dies, we say they are in a better place.
We say they are whole and well now.
We say that they are happy now.
But do we believe it?
Obviously I didn't. 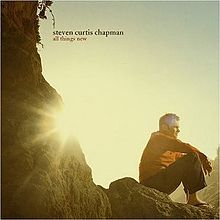 Because for years, I've held onto memories of the way my loved ones were when I last knew them. In addition to that, I've held onto memories of the many ways in which I failed them.
In reading this book, it finally hit me - my loved ones are well, they are whole, they are happy now, and they have no regrets.
And neither should I.
Focusing on the past, and my mixed bag of success and failure as I lived through it - that is not where my focus should be. Because the past doesn't exist anymore and because Jesus, when He comes, makes all things new.
In both life and in death, when the Risen Christ comes to us, He makes all things new.
And that is where our focus should be.