Are You Kidding Me???

Wal-Mart workers walking off the job on the eve of Black Friday?
Hostess abandoning the iconic Twinkie?
Maybe the Mayans are right after all... In which case, we don't need Black Friday at all since the world is slated to end before Christmas...
So is this holiday going to be  a cross between Apocalypse II and the finale to the Grinch Who Stole Christmas, with everyone standing around a big burned-out crater singing about how Christmas came without all the packages, ribbons and bows?  Without the turkeys, the hams, the stuffing, and yams?  Without even... perish the thought (!) Black Friday bargains to kick off the season of love and good cheer???
Puh-leeze....
First of all, I applaud the Wal-Mart workers.
Second of all, I don't like Black Friday.  It starts Thursday evening now, while grandma is still putting the last of the turkey away in tupperware containers.  What I'm saying is: Black Friday is crowding Thanksgiving... big time.  It's only redeeming feature is that it brings out the best in people.  Oh, wait!  Isn't this the event where a hapless shopper or two got literally  trampled to death by some eager bargain hunters...?  Well, scratch that point. 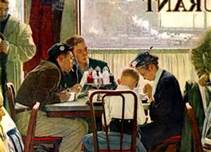 Still, it's American to sleep on the sidewalk in order to get the best bargains the morning after Thanksgiving, right? Um... not sure...  Don't remember a Norman Rockwell painting on that one...  But anyway, we don't have to sleep on the sidewalk anymore because Black Friday actually starts on Thursday evening.
Which means that instead of the sun standing still, the moon, um, speeds up a bit?? Or the sun does a fast-forward deal  so that Thanksgiving is actually a 20 or so  hour day instead of a  24 hour day?
What I'm saying is this:   basically, we can't even set aside one full 24 hour period just for family time and the giving of thanks.  Just  1 measly day out of 365 and we can't even pause for the entire day?  What are we doing?  Tipping our hat to God (or not), gobbling down turkey and dressing, watching t.v., playing games, texting,  and then  bundling up so that we can run full  tilt to the nearest store to get more of what we've already got?
Does God have anything to say about this?
If He does, would He find any of us listening?
Maybe Black Friday is a great way to start off the shopping season that leads to the big  Winter Holiday blow out  where we satiate ourselves with food and material things.  But it's a poor way to end our one day of giving Thanks and to initiate the start of the Christmas season, a time which, I think, is supposed to be about.. um... Christ.
And not things.
But I could be wrong.
But if I am, so are Matthew and Luke.  Not to mention maybe Mark and John. You know.. those guys...