The other day, I started to write a totally different Ten on the Tenth  blog...  I began a list of things that make me tired (i.e., aggravate me) and was doing quite well on that topic actually when my husband read part of my blog and said, "This is good, Honey, but isn't Ten on the Tenth usually about  ten things that you are  thankful for?"
Ummm... well... yeah.
So here I sit at 1:30 a.m., after being roused from a pleasant sleep by my old friend, acid reflux, and I'm very qualified at this moment to write about such topics de jour as:  Things That Make Me Tired... or Things That Tick Me Off... or Things That are Wrong with the World...
Why do worries, physical ailments, bad news, etc.  always seem worse in the middle of the night?
Last weekend when I was staying with my niece, I managed to accidentally set  off the burglar alarm system  at ... yep, 1 a.m.... by pulling too hard on a bathroom door that was stuck against the frame. (Apparently when the door popped open, it changed the air pressure in the area where the sensor is and that was all it took.)  Had I known all heck would break loose when I tugged on that door, I promise you: I would have stayed in that bathroom for the rest of the   night rather than set off this gosh-awful, ear-splitting, continuous, wake-the-dead siren, punctuated every 30 seconds by a scary male voice announcing, "A win-DOW is OPen."  (Who makes those recordings anyway???)  All the system lacked was disco lights; if we'd had that, the house would have undoubtedly qualified for a place in a Freddie Krueger movie or an Alfred Hitchcock film.  As it was, the quiet, otherwise charming house suddenly seemed possessed and my pulse rate spiked in accordance with the house's electronic stress.
And I'm thinking: Okay!  I'm the adult here!  So I gotta do something...
But what???  I didn't even have a popgun with me!  And even if I did, I don't know how to shoot!  So  I ran, scrambling across the polished wooden floors, sliding  first to one room and then to the next, just barely crossing the threshold each time so that I could eyeball the windows in each room from a distance.  And all the while, I kept having  visions of some miscreant (huge, menacing, can't spell..) clambering over the windowsill and attacking us while the alarm is still blaring but before the police can get there. And I'm thinking, "What use is an alarm system in a case like that???"
While I'm running, my niece was hurrying to get downstairs and in what was probably seconds but seemed like an eternity, she reached the downstairs area and had the code punched in, silencing the awful words, "A win-DOW is OPen."    Then we just stood there and stared at each other for a few seconds, she in her Cheshire Cat footed pajamas and I in a tent-like house dress that would not look good on the front page of the crime section of the local paper, and she said, "Did you shut mom's bathroom door all the way closed?"
I nodded my head, clueless as to where this was going..
"And did you have to pull on it really hard to get it to pop open?"
Again I nodded my head.
"Well, sometimes that makes the alarm go off."
Ex-cuse me??  Tugging on the main bathroom door caused all that to happen???
I should have been relieved.
My fears should have all vanished.
Instead, I just really couldn't take it in.
We said good-night once more and  I went back to bed where suddenly, I was scared spit-less.  Just a few hours earlier, I had been lying in this beyond comfortable bed taking in all the color-coordinated beauty around me, luxuriating in what was a deluxe 4 star room compared to my own room at home and now I was lying under the covers, unsure which door to face in case a burglar really did pop into the room. Like that would make a big difference if I was facing one door when he burst through the other one.. duhhh...
All kinds of thoughts went through my mind for the next hour or so.
What if it wasn't the bathroom door?

What if someone was climbing in the window and because I didn't actually go and pull back the drapes in each room, I missed them?

What if the bird calls outside were.. really thieves signalling to each other, saying the coast was clear because the main guy was already on the inside..  (Don't laugh, I saw that in a movie once so it has to be true...)
What if... What if... What if...
I tried to sleep. I really did. But every time I closed my eyes, I heard that stern voice booming out, A win-DOW is OPen! 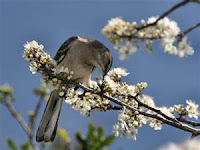 The next morning, however, sun was streaming in through the  very same windows that had scared the daylights out of me the night before. And the birds chirping turned out to be.. just birds chirping.   And when my niece accidentally pulled too hard on the bathroom door later in the day and the alarm went off, it was aggravating and annoying...  but not frightening.
Sometimes it's perpetual night down here or it seems that way.  Going through cancer.  Waking up in the middle of the night with alarms going off:  how will I ever pay my bills?  What if my spouse really does leave me?  What if I have to have surgery again?  How will I ever get through my loved one's funeral?  What if something happens to my child?  What if I lose my job?  What if... what if...
There is such a thing as the dark night of the soul.
At those times, I need the Morning Star to rise and shine His light into the shadows, showing them up for what they really are.
So thankful that in the wee hours of the morning, He is there.
Seriously thankful for that. Even when it takes awhile for me to calm down and sense His presence, He's there.
As the hymn says, I need Him every hour.
But especially in the hours just before dawn...