No words of wisdom today....
Not sure I had any yesterday or the day before...:)
But I do love to write...  Obviously...
And I do love to read...
And it's been a few days since I tried to palm a book off on anyone who happens onto this blog...
Soooooooooo...... here goes ;)
As part of a  women's Bible study that I'm doing right now, I had to review my life and categorize different times in my life as "winter", "summer", "fall", "spring";  I could also categorize stormy periods in my life.  We could use clip art from our workbook or draw our own symbols to put with abbreviated descriptions of each period in our life.  Since Ah'm re-tared  with all this free time on my hands..(ha!) - I decided to draw my own symbols as I summarized my misspent youth and adulthood...:)
For  the first years of my life, I wrote down that I was born into a dysfunctional family and then was saved at eight years of age. Above this, I drew a rather primitive image of a shepherd holding a rather identity-conflicted sheep... Actually the animal looked more like a woolly dog...  And I guess that would be me...
But, I digress...
The rest of the "seasons" of my life  had simpler symbols - a couple of one-dimensional flowers served  for "spring", a sun with rays coming from it for "Summer", a few leaves stood for  "fall" and some dark, heavy clouds symbolized  "winter" which, in this study, is synonymous with hard times of testing and suffering.
As I looked back over my time line, I was surprised to see that stormy "wintery" periods cropped up routinely - almost every other season was turbulent.  One season in particular, 1994 - 1995, was so bad that I just ditched the clouds imagery and instead drew a tornado reaching from the sky to the ground!
During that two-year period, a loved one went through a traumatic divorce, my husband's company announced they would pull out of the North American continent by Dec. 1995 (which they did), my mom was diagnosed with pancreatic cancer and then my dad showed up a month later, also terminally ill.  They both died within three months of each other - Sept. and Dec. of '95.  I was working full-time during much of this period and had a son who was three when it started and five when it ended while I was hitting the big four-oh somewhere in all the middle of that. Not an easy time.
Before my mom was diagnosed with cancer in June of 1995, we had already had a tough couple of  years wondering about Phil's work and also dealing with all the viruses David managed to  pick up in daycare.  At times, it seemed like  he routinely brought home a new virus every month, like clockwork. Certainly by May of '95, we  had gone through stomach viruses, bronchitus, flu, pink eye, strep.. you name it.  Holidays just meant it was easier to get David to the  pediatric clinic :) with the exception of Christmas where everything was closed and you had to make a trip to Children's.  (Loved the Christmas decorations there!!)
At any rate, in the spring of '95 I was just barely hanging on, hoping summer break would be calm.   But as it happened,  the first week in June I had to take mom to the hospital and within two more   weeks we were making preparations to move her into our bedroom so that Hospice could put a hospital bed in it for her.  At that point, I knew it was not going to be a good summer; however, I had no idea exactly how un-good it was actually going to be..  One month after mom came to live with us, a retired couple, friends of my dad,  brought him  down here in a motor home.   He  looked like a survivor of Dachau  because he had refused to have a feeding tube put in some months earlier and had been slowly starving to death ever since. He had walked out of my life about 22 years earlier - over 6 feet tall and healthy -and now he was returning  weighing about 90 pounds, unable to keep saliva from dripping from his mouth and unable to speak.  To say it was a shock to have him back in our lives would be an understatement.
Not only was it traumatic, but since my parents hadn't had anything to do with each other since their divorce some  25 years earlier, it was complicated,  tricky  to say the least.

Just before my mom was diagnosed, back when I just  thought things were bad :), I was lying in bed with strep throat reading a copy of the In Touch Magazine by Dr. Charles Stanley. In this particular issue,  I noticed an ad for a book by Ruth Myers called Thirty One Days of Praise: Enjoying God Anew.  Of course, that was all I needed and as soon as I was well, I went out and bought a copy.
I still have that copy, dog-eared and taped together, and every so often, I get it out and use it again to jump-start my devotionals.  One of the reasons I hang onto my first copy is because of the notes I've made in the margin. 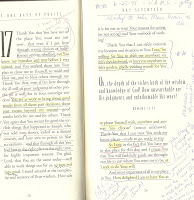 For example, on day 17 I had written: 6-25-95- U.A.M.S.  Getting ready to take mom home to die.  Then, at the bottom of the page I had written:  In May I prayed this would be a restful summer and I planned to use the rest time to meditate on this book.  Now my plans are reversed - they are to meditate on this book so that I will be able to rest.
As you can imagine, this book has a special place in my heart and when I allow time to really absorb the praise passages in it, it never fails to help me get some needed perspective.  The woman who wrote it was no stranger to trouble, having buried her first husband on the mission field while he was in his early thirties.  So it's a very positive book born out of sorrow and therefore a great help when the storm winds are blowing.
If you have a tornado or a tsunamai brewing in your life, you can't beat it.  By the same token, if you have a beautiful fall day and time to enjoy it, it will just make the day that much better.  Winter, Spring, Summer, Fall - it's a good devotional companion to have in all the seasons of life.