When I was in my twenties, I heard a pastor, Dr. Charles Stanley, say, "The greatest thing you and I have as a Christian is a God who cares deeply about us.  He cares when we hurt, when we feel frustrated, and even when we are lonely."
Today in the blog, And That's That, my friend gave a neat story about how God used a bus driver to go the extra mile and help her.  If you haven't read the blog, I would encourage you to do so - you will be blessed. She's more succinct than I am and each day I come away with a main thought that helps me throughout the day.  At any rate, she ended today's blog by asking how God has provided for us.  The first thing that came to mind was I guess a strange little story:)  (My life is full of them...) 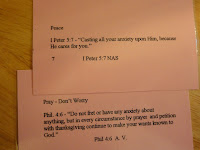 Several years ago I completely shattered my wrist and was awaiting surgery.  Before I could have the surgery, I had to have the urologist sign off, saying I no longer had a kidney infection (One thing had nothing to do with the other; I was just a blessing to more than one doctor at that time...:)  My arm was in a wrap and I was on pain pills so the week before, my husband had driven me to the urologist's office so his nurse could test me.
Now, several days later, I was at home by myself and unable even to open a jar of peanut butter... (I still remember the surprised look on the mail lady's face when I stood by the mail box waiting for her and then asked her if she could open the jar for me!  But she did it! I actually made a lot of new friends during that time..).  At any rate, I certainly couldn't drive.
And, of course, the urologist's nurse called me that very day, telling me the  sample they had gotten from me was contaminated (go figure....=/) and she knew I had a projected surgery date but... if I didn't get in that morning with another sample, they couldn't possibly have the test results back in time for the surgeon.
Which meant I'd have to re-schedule the surgery and this wouldn't be so easy because there were a lot of other idiots..uh... unfortunate people like myself who had fallen on icy pavements that particular Christmas.  So the surgeon was having to work me in as best he could and if our first projected date fell through, then it'd be at least another week before he could fix my wrist.  Which by that time, they  told me, the bones might have started to knit back and they would have to re-break them before operating.  Yee-ouch... !! For a person who cried (and, yes, I was an adult at the time)  when a nurse told me to roll up my sleeve so they could give me a tetanus shot, the prospect of having them re-break my wrist was not a palatable one...
So there I was: wearing a housecoat that I couldn't button/unbutton by myself.  Needing to get to the urologist who was 30 minutes away when I couldn't drive and knowing that although  my husband would try, he  could never get off work in time to get me to the clinic before it closed for the weekend so basically... I was stuck.
I prayed.  I'm no super saint; it's just that practically speaking, there wasn't anything else I could do. I mean there's not a lot of people you can call up on the spur of the minute and say, "Can you come over, help me get dressed, and take me to the urologist in the next, say, oh, 40 minutes??
Ten minutes after I prayed, a friend showed up at my door.  This friend was originally from Nigeria and was out of the country from time to time, not to put too fine a point on it.  When she was in country, she was currently living in Pennsylvania and working on her Phd.  In fact, it had been months since she had moved away from Arkansas and since we were both busy, we hadn't kept in touch a lot.
Yet here she was on my door step, back for a surprise visit.  An  international with a Master's degree from Princeton, working on her Phd at Penn State and yet, as a sister in Christ, she didn't even blink an eyelash when I opened the door, and said, "Thank the Lord, you've come!" and started babbling about housecoats, surgery, contaminated urine samples, and how I didn't want my wrist re-broken.
This sweet sister in Christ got me to the doctor's office in time to make my contribution and never acted like she did anything special for me.  Later, as we talked about her impromptu visit, we marveled at the way God provided for me.
Does He care when I'm hurt, when I'm frustrated, when I feel alone?  Yes, He does.  He's proven it to me over half a century of living, the story above being just one out of many.
Posted by Unknown at 10:12 PM