Two-pager turners, opposite ends of the spectrum... 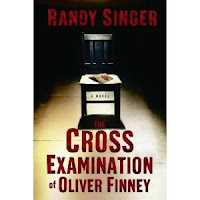 Over the past  five years, two novels and two novels only have actually caused me to  read feverishly late at night and at times also  halt part way through the book so that I could actually start writing down clues, determined to figure out the plot!
The first book to have this affect on me was Randy Singer's The Cross Examination of Oliver Finney.  I'd never heard of Singer when I bought it - I just liked the title, the cover, and the blurb on the back.   As I neared the end of the mystery, I found myself declining invitations to go to lunch during in-service so that I could go out, buy a small notebook and start writing down all the various facts, hints, and innuendos Singer had deftly scattered  throughout the plot.  Can we say "obsessed"?  (Coincidentally, he still fooled me.. and he played fair!)
Several days before I bought the notebook and became super-sleuth, I also purchased the companion book, The Cross-Examination of Jesus Christ - again  all in an effort to figure out who the bad guy was!!!   Singer uses various codes in his novel - each chapter has a clue with a different "cipher" giving new, vital information.  You can figure out the encrypted clues yourself  (I couldn't but I'm sure others who are into codes can) or you can buy the companion book, which gives more hints on how to crack the various codes. It is a brilliant way to get readers to buy an exciting novel and then have them wind  up reading about Christ. And really,  I feel this was his main goal - not to hook buyers into getting two books, although for a writer that's a fair goal, but to get people who might not otherwise read about Christ to consider His claims as the Messiah.
(Coincidentally, you don't have to buy the non-fiction book - Singer explains each coded message at the end of each chapter in the novel. But if you want to try to beat the author at his game, the other book helps!)

This summer has been a bonanza for sequels - almost as if some of my favorite authors decided to help me celebrate my retirement by cranking out the next book in their series.  One of these obliging authors, Davis Bunn, ticked me off, however!  I read his last two books,  Gold of Kings  and The Black Madonna.   Honestly, I had a little trouble staying with Gold of Kings but had no problems with The Black Madonna, really loved it - so much so that I went back and re-read Gold of Kings and on the second read, fell in love with it as well. But The Black Madonna was a great read anyway I looked at it.
Except for the fact that.... The Black Madonna left things hanging - the anti-hero in a desperate situation  =/ !!!  So when I saw that Bunn had a new novel coming out, Lion of Babylon, I pre-ordered it for my Kindle and then waited anxiously for it to be released.
It came and I got mad!   Huge Bummer!!!  This was NOT the sequel to anything.  It was a whole new novel!!  Agggghhhhh!!! I didn't know how he could do this to me!!!
I complained ... to Phil, to the dog who was the only one awake when I actually started my new novel, to our son...  But then I got into this novel and ... honestly, I love it more than any of the others that I have read by him.  And that's saying a lot. Bunn has a background in international finance and yet, somehow, he's currently Writer-in-Residence at Regent's Park College, Oxford University.  (His web page and blog explain how he got from point A to point B.. an interesting story in and of itself).
Although I was basically set against this novel from the first, I'm not yet half-way through and I found myself, once again - for the second time in 5 years -  taking notes on a thriller, determined that I'll figure this out before all is revealed!  In that sense, it's been hard to put the book down, truly a page-turner as I avidly look for fresh clues and anxiously await what might be lurking around the next corner...
On the other hand, I've found myself actually turning back a page or two, trying to recapture some of the phrases that he uses because I love them.  I guess I'm saying, the book is not just suspenseful, it's a delight to read.
For example, I love the passage where a hard-nosed  American is explaining an Intelligence operation to a very smart, low-key Iraqi. The situation, which involves a lot of back-stabbing, danger, and denial (of course!),  causes the Iraqi to respond with, "This is very curious... It is almost Arab." :)
There are other passages that I love even more but it would take forever to find them on my Kindle. And I want to get back to the novel to find out what happens to the main characters, all of whom are  so real that it's hard for me to remember that they are, actually, not....  It's that type of a book.
The book itself is dedicated to Anne Graham Lotz, which pretty much says there is a Christian vantage to all this, although I haven't come across it yet.  Still from the first page, it's obvious that the hero of the story is Christian - an American who soon joins up with a devout Iraqi Believer, almost as if they are two sides of the same coin.  At the same time, one of the most likable and noble characters in the book (so far) is Muslim and he's every bit as memorable, admirable as the others and I really like that.
I started off mentioning two books - they are opposites in some respects. The hero in The Cross-Examination of Oliver Finney  is a flawed older man, a judge who has a dry wit, a smoker's cough,  a compassionate nature lurking under his crusty exterior, a major secret, and a desire to do something well for God.  He also stands out in my mind as if he were a real person, someone I feel nostalgic about b/c I never got to meet him in real life.. .if that makes any sense.
And then you have the young, lithe, compassionate but rock-solid Marc Royce, former intelligence operative in Baghdad, working feverishly to save a friend while attracting the attention of a beautiful Iraqi woman...:)
Heroes at the opposite end of the spectrum but both books are truly great reads in my opinion. So good that I felt like I would be failing in some way if I didn't stop and  put in print how amazing they are.