He wouldn't celebrate Christmas because he said no one knew for sure when Christ was born.   As kids, my siblings and I were relieved that Aunt Jewel's birthday was Dec. 25 - we felt like that was God's way of preventing a disaster by making sure she did get at least one  gift on Christmas Day!  He also objected to women wearing shorts - I never saw my aunt Jewel in anything besides  a dress, thick hose, and on weekdays, a full-size apron.  (After Uncle Nathan died, Aunt Jewel's health declined and she was admitted to the hospital for evaluation. A young doctor came in one day, gave her a pep talk and said that in the morning, a nurse would be coming to take her picture. She got up early the next morning so that she could put on her best dress, her hose, her Sunday shoes, and fix her hair.  She didn't understand that the doctor meant they were going to x-ray her!)
We didn't always agree with Nathan's strict beliefs but we always respected him.  As I look back on his life - starting out when people went to town (Cabot) in a horse and buggy and dying a few years after the EAgle landed on the moon - he saw tremendous change.  He went from farming to preaching, buried one wife and married another.  And really, the verse that comes to mind when I think of him is "Jesus said to him, 'No one who puts his hand to the plow and looks back is fit for the kingdom of God."  Luke 9: 62.  Setting his hand to the plow and not looking back.. That would be Uncle Nathan.
Except there were those letters  ;>) 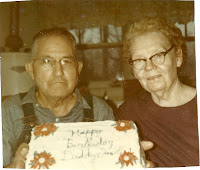 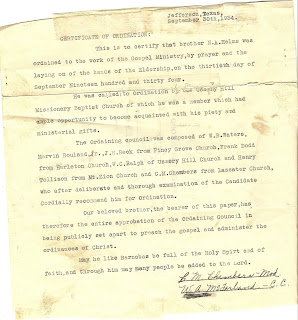