Ten on the Ninth in anticipation of.. the tenth... 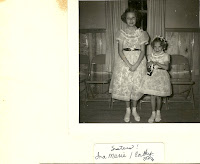 1.  I am thankful that my parents let me sit in the balcony at church under the supervision of my older sister when I was small.  Trust me -that took a HUGE leap of faith on their part:)  To this day, I still prefer to sit in the balcony b/c of the memories it brings back to my heart and mind - mostly of the organist playing the Doxology every Sunday, no holds barred while I swung my legs back and forth and longed for the day when my feet would touch the floor... I thought every church started off with the Doxology every Sunday morning and I fully expect to hear it when I enter Heaven..

2.  Speaking of which,  I am thankful that my sister is living in Heaven right now.  She struggled with mental illness from the time she was 27 until she died in 2008 at the age of 60.  Before she was diagnosed as a paranoid schizophrenic,  she was pretty,  hard-working, smart and fun to be around. She was a great mom and wife and for me, the perfect older sis.   I look forward to the day when I will see her restored physically and mentally to the way she was in her prime. Great times are ahead!  Of this I have no doubt!

3.  I'm not always thankful that my dad was abusive but I am thankful for this:  that because he was a bad father in some ways, I had to find another father and through BSF, I was led to trust God for all things fatherly.    And to this day, I still remember specific ways that He helped me - even involving such practical dilemmas as car repairs on a nothing budget or being swamped with feelings of jealousy as I saw my peers being hugged by their dads and then, later, being swamped by feelings of amazing love as I felt His invisible arms just wrapped around me.. Woo Hoo!! I found I had the best dad in the whole world!!!

4. And then, as if that weren't enough, He gave me a real earthly father. Another thing to be thankful for!!!   When  I got married I soon  realized that I got a two-for-one deal - a husband in Phil and a dad in our neighbor, Cecil.  Cecil and Thelma became like second parents to me and I loved it.  I have to admit that it was a little startling to hear my "dad" tell me that he loved me or that I was  a great mom or that I was beautiful.  But so neat!!!  When God restores what is lost, He doesn't do a half-way job!

5.  And then, guess what?  He also gave me another sister and for her, I am eternally thankful!!!  She's a  beautiful, smart, funny, hard-working Jewish lady who entered my life via the net  in June of 2001.  Over the years we've shared everything from notes on menopause to cancer diagnoses to dilemmas with our sons to comparing notes about our twin careers as teachers.   How neat is that????   On the other side of the world, I have a sweet sister!!! And when I retire, look out Tel Aviv!!! Here I come!!! (But first I have to lose 50 pounds, change my hair color and get a new wardrobe.. it's a tough life but someone has to live it ;>)

6. And since this "tenth" seems to be evolving into being thankful for negatives turned into positives, I guess I should mention that I'm thankful for living in the 'Hood. (Obviously, it wasn't the 'hood when Phil bought this place but over time...)  This is the deal: when I first moved in here, I was scared of my own shadow. Truly!  I remember freaking out one day because  a neighborhood kid was running down the street with a beebe gun for Pete's sake... Well, guess what??? Got over that!!!!  Seriously, with a meth house next door for 9 years, you have great opportunities to learn to trust Him!

7.  Another negative turned positive?  In the summer of 2001, not only did my "second mom" Thelma move away, but my sweet sister-in-law moved also - within a week or so of each other.  I hated seeing my family break up like this!!!  I couldn't even look at Thelma's house without crying at first (and that was before the cops started coming all the time).  But in Feb. 2010, our meth neighbors were suddenly gone and exactly a week later, my sister-in-law moved back to this area.  In 2001, she was within walking distance of our house and now.. guess what? She is again!! Meth labs gone... Family close by...  Am I thankful?  You bet!!!!  Was all that a coincidence??  Don't think so...

8.  Hmmmm... What else??  Well, it's 24 years and counting and I'm still married to my best friend....  When I was in college, I learned from psychology that coming from a dysfunctional home like mine, the chances were slim and none that I would be able to have a good marriage.  So what did I do? I went out and married a guy who had alcoholism and clinical depression running rampant in his family... Ha!  (I guess I thought the odds were too high in my favor so just to make things interesting....)  Seriously,  we knew God was leading us together and the years since then have confirmed that.  Basically, the reason for our successful marriage (against the odds) can be found in   two words ... But God.. (Ephesians 2:4). Soooooo thankful that God isn't into statistics... Aren't you?


9.  What other negative am I positively thankful for?  Well, when I was forty, my dad came back to Arkansas.  I hadn't seen him since I was a teen-ager. In fact, the last I had heard of him was 21 years earlier when  he opted to become a dead-beat dad so that he wouldn't have to help pay my way through college. (I was a freshman in college at the time and already working 37 hours a week to help support myself).   Sooo.... many years later, when I was forty and I  had a mom dying of pancreatic cancer and a four-year-old son and a   full-time job, I was stunned to have my dad turn up, also on Hospice, wanting me to take him in and care for him.    It was one of those times when I thought the whole world was going crazy and taking me along with it.  What did I do?  I called every friend I had and cried on their shoulders repeatedly, seeking sympathy, which they readily gave.  All except for one.  When I told this friend about my sad state of affairs, she responded with, "How I envy you!!!"  What???? Honestly, her response made me thoroughly angry.  But in retrospect,  it was the one comment that helped bring me through... What did she mean by it?  Her dad, to my surprise, had also been abusive.  She ran away from home as a teen and later became a Christian.  As a new Christian, she took the verse seriously that said to honor your father and your mother. She grieved because she had never shown honor to her father - not for the abuse - but simply because he did give her life and because  the Bible said to do that.  She hunted for him and finally found that he had died ten years earlier.  IN her words, she never felt she had closure.  When my dad showed up, I did get closure. I was able to tell him that I forgave him and I was able to give him the gospel. To this day, I don't know if he took to heart what I said but I have no regrets.  And for that, I'm thankful...

10.  Bottom line: I'm thankful that God is in the business of taking sows' ears and making silk purses out of them  (that would be me!) and that He is also in the business of making all things work for good to those who love Him and who are called according to His purposes (by His grace, that would also be me!!)
Posted by Unknown at 1:31 PM