Life Lesson from a Chihuahua...

I'm sitting here with an (almost) toothless chihuahua wrapped in a baby blanket and resting on my lap.  She's pretty clueless.  We can bribe her (most of the time) into taking care of business in the front yard; however... she still has her "on purposes" inside the house from time to time.
She can do a good imitation of a mule when it's raining, digging her heels in and refusing to leave the  front porch because a single drop of rain fell on her nose.  And yet  she can go right outside the side door, directly across our carport, to potty on the driveway in the same rain that is falling on the front yard and she has no problem with that.  (Can we say short term memory is, um, very short term??)
Her communication skills are distinctly limited.  When she wants something, she does one of two things:  she either emits  a sound that is like an aborted growl or she gives off a plaintive half note of high pitched grief.  When she sees me opening the dog food each day, she does what we call her "happy dance" - circling around on the floor until it makes us dizzy (literally), beating out a tattoo of little feet on the kitchen tile so rapidly that the Shirley Temple version of a centipede could not begin to compete with her.
She supplants Buddie, our other indoor dog who has all his teeth and outweighs her by ten pounds, by making him get off  his favorite pillow. How? She simply stands in front of the couch - all five pounds of her -  looks up at him (she has to look up to see just about anything!) and barks at him. That's it!   That's all she does!  And when he's heard enough, he jumps off the couch, gets on her cushion (which is on the floor), and probably thinks dark thoughts about the female of the species while she curls up in the spot that he has obligingly warmed up for her.    Does it bother her?  Not a bit.  She did it yesterday. She did it today. And she'll most likely do it again tomorrow.
She hates men so when my husband or my son say anything to her, even in the most dulcet of tones, she growls at them.  And then expects them to feed her part of whatever they are eating.  Which they do...
And no matter how many on-purposes she's had or how mean she's been to Buddie, she is always - and I mean always - confident that I'll welcome her with open arms whenever she wants to snuggle next to me in my chair or curl up on my lap.
I don't know where the expression, "It's a dog's life" originated but it certainly didn't come from this house.
Sometimes I look at her as she naps, scarfs food she didn't earn, happily chases the same squirrel in the front yard every day (never catches him which is good because he's bigger than her), and manages to get her way 9.5 times out of 10.
And I wonder: between the two of us... which one is smarter?

It's sad when a Chihuahua redefines your idea of heaven... Ha!
But I do  have to admit that Gracie has seriously given me a better understanding of ... grace. 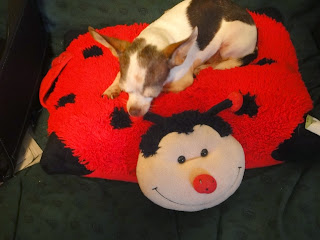