Two nights ago, a man was kicked and beaten to death just a few feet away from our front yard  while I watched from our living room window.  It was dark, in the middle of the night, and the victim died on the other side of his truck, which shielded me from the particulars of what was happening. All I could really see was shadowy figures running back and forth across the lawn while I heard what I thought was something being slammed into the side of Sammy's truck. It wasn't until last night that I realized what I heard was probably Sammy's body being pounded up against the side of his vehicle.
Ironically, he was really proud of that truck, an expensive over-sized vehicle that was always clean and polished and which basically shouted, "I've arrived!  I have money!" Mesmerized and shocked to my core, I watched Friday night as first the ambulance took Sammy away, slowly and without any sirens going, and then as a  tow truck hauled off  his beloved  truck, which was now ignominiously battered by bricks and almost certainly stained by Sammy's blood and was perhaps the best, albeit silent, witness to what happened to its owner.
This morning  I didn't plan to go to church but at the last minute, I did.  In my opinion, it proved to be pretty much a disaster.  I love the music but this morning something broke inside me as I tried to reconcile the bright lights and the singing which was my current reality with the memories of a far different reality - of metallic thuds in the dark of night followed by  surreal strobe lights illuminating a death scene.
This morning, two kingdoms collided inside me - the kingdom of darkness - which has left an indelible impression on my mind - juxtaposed against the kingdom of light which for a few tortured minutes today seemed to be as surreal to me  as the blue lights on Friday night.
I had to ask myself, "Which one was real?"
The answer was: both. Intellectually I know that. Heart wise, for a while, I didn't. Maybe that's not good to admit  but that's just the honest truth.
All I can say is be kind to the stranger sitting in the pew next to you.  You never know what is going on inside their heart and when a person is torn between Kingdom realities, the struggle can be intense.
Today the total stranger standing on my aisle stepped back to let me pass her and as she saw my tears she said, 'It'll be alright, Honey."
And I know it will, just maybe not today.
And maybe not tomorrow either.
But in time, the ruler of this world must give way to the One that I am waiting for and at that time, all death will cease and every tear will be wiped away.
Today I cried a bucket full and am still crying a little even as I write this.
When I get to Heaven and see my Savior face-to-face, He's going to have to have a ginormous box of Kleenex and those in line behind me will have to just wait while the tears of this weekend are wiped away by His nail-scarred hand. He alone is my hope.
That plus the words, "It'll be alright, Honey." spoken by a total stranger as well as the kindness shown to me by ushers and the pastor as I blundered out of the sanctuary, which for me was anything but this morning,  thinking to find a bathroom where I could "pull myself together".
Earlier this month, I heard Lisa Harper quote the "noted theologian Mick Jagger", saying that Mick was right - you can't get no satisfaction down here.  On a Sunday morning following such a Friday night, I would have to agree.

Yet I know that's  not really the end of the song. The rest of it goes: you can and will find satisfaction up There.
If you know Jesus.
Which I really, really, really, really hope that Sammy did.
This weekend for me, two kingdoms graphically collided, impinging on each other.  They are both real, very much so.
I have to ask, to which kingdom do you belong? 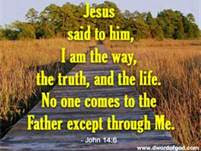