Ten on the Tenth...Waiting for something?

1  Day....      A young woman living in the Arabian peninsula was terminally ill and losing ground steadily.  Finally, although a Muslim, she came to a Christian women's prayer group and asked them to pray for her.  They did.  The very  next day was her weekly check-up. The tests results were negative so  the doctor thought there was a huge mistake on the nurse's part or the lab's part.  He ordered the medical tests again and once again, they came back negative.  Finally, he  told her she was well and canceled her next appointment. She and her husband became believers the same day.   Sometimes miracles happen!  Don't quit praying and watching  for them!     story  from   the book Which None Can Shut.

3  Weeks....      Hudson Taylor  adopted the motto  "move men through prayer alone."  Once Taylor's absent- minded boss forgot to pay his salary.  For three weeks Hudson asked God to remind his boss to pay him.  AT the end of the third week, it seemed God had failed. Hudson's bills were coming due and even if his boss remembered to write a check, the banks were already closed for the weekend. But after closing hours, a wealthy patient came to the office and insisted on paying a large bill in cash, Hudson's boss remembered that he owed Taylor money, and Taylor went  home with enough money to pay his bills and meet his other needs. This convinced him that he could trust God for all  his needs on the mission field - he eventually established the China Inland Mission which is known today as The Overseas Missionary Fellowship.   The news right now is full of dire predictions about the economy.  God has ways of caring for His own, even financially.  The Bible tells us to keep on asking, keep on seeking, and keep on knocking.. 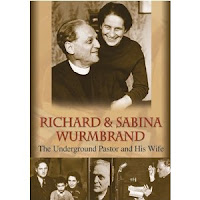 3 Years...      Romanian Pastor, Richard Wurmbrand, spent three years in solitary confinement under the Communists because he preached Christ after the Communists told him not to.  He kept his sanity by composing and delivering sermons in his dark, silent, underground cell even though no one was there to hear them.  He also tapped out messages in Morse code to encourage whoever happened to be in the cell next to him.  He said that the presence of God  became so real to him during this time that it was a bit of a  let-down when he eventually was allowed to live with the other prisoners. Feeling isolated and alone? Keep asking and waiting and know that  God can bless our "wait" time in totally unexpected ways. 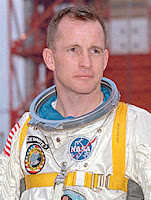 4 Years...      Ed White was one of the three Apollo 1 astronauts who died in the capsule fire on Jan. 27, 1967.  Many people may know about his death and some probably know that he was the first American to walk in space.  It's probably lesser known that Ed really wanted   to take  a Bible to the moon. For four years after his death,  the NASA chaplain and prayer group prayed that Ed's dream would come true.  ON Feb. 5, 1971, it did - Astronaut Edgar Mitchell landed the lunar module  on the moon and inside  was a copy of the Bible - through the prayers of the NASA prayer team and the efforts of others, Ed's dream had been realized and the Bible has not only circled the globe, it has landed on the moon.  Sometimes dreams crash, we lose people, and everything seems to have come to an abrupt end.  But with God's help, the dreams (like the people who once held them and have gone on to something better) can still live on!  And be accomplished!   If you are still left here on earth, it's for a reason:)  (And if you are reading this, I assume you are still earth bound...) Keep on keeping on in His grace!

7 years...    Isabel Kuhn lost her faith in college and stayed away from all things Christian for many years while she pursued life as an agnostic, much to her father's grief.  When she finally went back to church again, she was stunned  to learn that one  of her father's friends had been praying for her for 7 years. She eventually had a 180 degree turn-around and  went on to spend the rest of her life as a missionary in China . But that's not all, she wrote several classic books and her daughter followed in Isobel's footsteps by investing her life in  Thailand as a missionary. Her father's prayers and the prayers of this other man were answered, I think...   Don't give up on your kids; pray for them!

8 years..     J. O. Fraser left England and moved to China in 1910 to spread the Gospel among a tribal people, the Lisu. He had a few converts at first but then for several years - nothing. And the first converts began to backslide.  For the next six years, he traveled over mountains and lived in really tough conditions - worse than I can imagine - preaching to people who were afraid or unwilling to respond.  By 1916 he was discouraged; he wrote this heart-felt prayer  in his journal, "Give me Lisu converts and I can truly say I will be  happy even  in a pigsty!"    He began an intense season of prayer and asked others back in England to pray in faith as well.  Later that year,  whole  Lisu families suddenly responded, began to grow in faith,  and then went out to  spread the message themselves. By 1918, 8 years after Fraser arrived in China, the Lisu Church had baptized  thousands of believers. Sometimes years go by with nothing and then suddenly, amazingly, the answers start rolling in.  Seeds planted in His vineyard will eventually bear fruit and sometimes I think He likes to surprise His worn-out  workers by busting out with answers that leave people open-mouthed and wide-eyed in wonder.  Keep working and praying.. you could be that "someone".

18 years...  At one time, Albania claimed to be the only 100% atheistic country in the world - that wasn't true by the way b/c there were Christians in the country even during the worst persecution.  An Albanian Christian living in exile, Sali Rahmani,  began broadcasting 15- minute- Christian radio programs into Albania from Western Europe.  He did this day in and day out for 18 years before he got his first  letter from a listener in Albania letting him know that someone was actually out there, hearing his broadcasts.  Not only were people hearing his messages but totally unknown to him, a small, underground church was thriving.  If God has given you a message to say, keep saying it.  If He's given you a story to tell, it's important that you tell it even if no one seems to be paying attention. 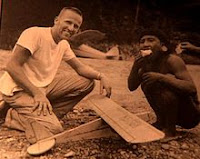 39 years...  In 1956, Nate Saint, along with four other missionaries, was speared to death in Ecuador by the  primitive Waodani tribe.  Over the years, the Waodani became Christians and then 39 years after they had killed the 5 missionaries, they asked Nate's son, Steve, to bring his family to the jungles of Ecuador and live with them.  So  that's what Steve and his family did .  During the year that  Steve and his family lived in the Ecuadorian jungle, the Waodani man  who had actually killed Steve's' dad  became like a grandfather to Steve's son.     It took 39 years but God brought everything full circle.  He has a way of doing that!  And somehow, I don't think Nate has any regrets right now for the way he spent his life - would imagine he's very proud of his kids and his grandkids.

100 years...  In 1844, Corrie ten Boom's grandfather, Willem ten Boom, started a weekly prayer meeting in his home in Holland - the purpose of the prayer group was to pray for the Jewish people.  One hundred years later his son, four of his grandchildren, and a great grand-child  were arrested in the very same house where the prayer group first started. Why?  Because they were involved in the Dutch underground movement to save the Jews from the Nazis.  In the book, Father ten Boom, Corrie wrote:  "Four of those arrested died in prison.  That was the divine but incomprehensible  answer to my family's prayers for the Jews."  P. 29. How many Jewish lives did they save?  I've read that the number is as high as 600. That is also an answer to Willem ten Boom's prayers.  Prayer can be dangerous... but a world without prayer is infinitely more so!  What if that group hadn't been established to pray for the Jewish people a hundred years before Hitler arrived on the scene?  Would those 600 have died? Who would have carried on Corrie's ministry for the next thirty years after she was released from the camp?  The bottom line is what Corrie herself learned during her time in  a concentration camp:     the only safe place for any of us is in the will of God. And prayer can span generations before it comes to fruition.... soooooo... :) keep praying - if it's not important for the here and now, it will be for the then and later...


2000  years +  From the foundation of the world, God planned to send His Son as the sacrificial Lamb for the sins of the world.  But it would be a while - more than 2000 years  -before the Messiah appeared on the dusty streets of Nazareth, bringing light to those who lived under the shadow of death.   Most of the twelve disciples probably came from generations of devout Jewish ancestors who had longed for, waited for the Messiah.  Even though it took longer than probably anyone imagined, when the time was right, God sent forth the Messiah just as  He  promised. That was back then. So how does that affect us now in 2011?  Without getting into the details - which I am NOT clear on- Jesus definitely said that He would be coming back.  How all that will play out is His problem; mine is to be found working for Him and waiting for His return.

Yet with respect to the promise of God, Abraham did not waver in unbelief but grew strong in faith, giving glory to God.  Romans 4:19-20.